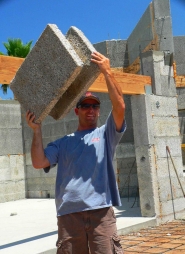 Zak Valade and his wife, Gina, lost their home in the 2007 Witch Creek fire. Now, they’re rebuilding a new home designed by famed architect Drew Hubbell,.constructed of fire-safe and energy efficient materials. They’ve also ripped out their avocado grove and planted a vineyard instead. 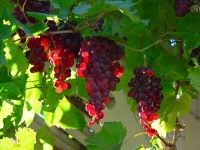 “Today, this is the new fire buffer,” Zak Valade says, standing atop the roof of his home under construction in the heart of Ramona’s wine country. He hopes to sell grapes  to a local winemaker--and make his new residence both safe and sustainable. “I like port wine; I have a friend who got me into earth building,” he recalls. “He’s a premier grape mixer in our area. I wanted to build out of adobe, but California won’t let you anymore because of seismic requirements.”

Instead, the home’s basic building blocks are PerformWall, a fire-safe product that maximizes design flexibility . “This is post-consumer foam—recycled Styrofoam like TVs are shipped in,” Valade says, hoisting a surprisingly lightweight Perform Wall block over his shoulder. “You mix in potash, Portland cement, and make blocks.” 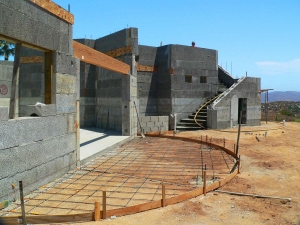 He runs his hand along a block. “You can take a torch to this side,” he said, adding that he visited the factory for a demonstration. His son placed a hand on the other side while a torch was lit, and it stayed cool. “As far as keeping heat out, this is a big thermos,” Valade said.

He also appreciates the design flexibility that using Perform Wall’s panel system provides over conventional (and flammable) wood frame construction. Pieces can be cut and positioned to allow curved architectural features. Valade's home, now under construction, features a Mexican-style curved porch shaded by a radius roof overhang. Brown stucco applied over the Perform Wall will simulate the look of adobe.

The original home burned because the wind-driven firestorm blew dead leaves from the avocado grove upwards, swirling them into an opening in the back of the original house. “Fire came from the east and burned the inside like a fireplace,” he recalled. “Everything melted.” 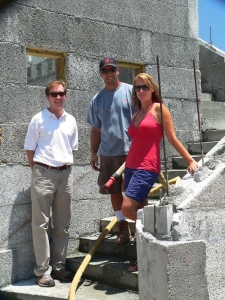 Architect Drew Hubbell knows first-hand the importance of fire-safe construction, having suffered severe damage to his own home and artworks in Wynola. Hubbell has also whole-heartedly embraced the concept of green, sustainable architectural design elements.

Hubbell said he’s used the product in about seven other projects…It’s a four-hour fire rating.” By contrast, stucco has a two-hour fire rating and wood, just one hour, he added. “You can turn it vertical and make a radius, or have a more organic shape, especially with longer sections. You don’t have to lathe it or waterproof it. There’s no water, so it’s also less money to stucco it.” 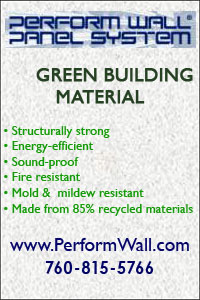 Given drought conditions and rising water rates, Hubbell also designed features to make the home water-efficient. A flat roof provides the option to collect rainwater and use it to water the avocado groves. He envisions draining water into a ground tank during winter and spring months, then using the water for irrigation in the dry summer and fall seasons.

Valade notes another advantage of his vineyard. “Grapes don’t use anywhere near as much water as avocado trees,” he said, adding that he also plans to plan five acres in aloe vera.
The home will also include two tankless water heaters, solar hot water, and solar electric/photovoltaic panels on the roof.

The flat roof will also accommodate a rooftop deck, where the homeowners look forward to savoring views of the surrounding countryside once construction is completed on the 3,400 square foot residence by early next year. 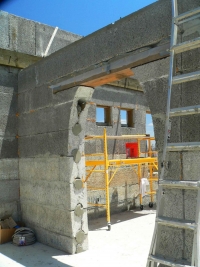 A central great room occupies the heart of the home, with wings on either side. A hall gallery leads from towering front doors to bedrooms and a music room/media room where Zak can practice his drums and “the kids can make as much noise as possible,” Gina said of the couple’s three active children.
That’s because PerformWall also insulates against noise. “I wouldn’t usually use PerformWall on interior walls, but Zac wanted it sound-proofed,” Hubbell explained.

To withstand summer heat and further keep the home cool, Hubbell said, “Every window out here had to be tempered.” He faulted the County for eliminating incentives to buy recycled windows. All windows in the home are new and certified by the Forest Stewardship Council as made from sustainably grown Sierra Pacific lumber.

As finishing touches, the home will feature used brick flooring (including some fire-stained bricks), plus rock veneers on the front and rear walls “like a little castle,” concludes Valade, who looks forward to savoring the fruits of his labors. 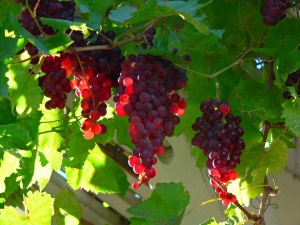 There are some cruel natural disasters that strike in place and in times when you cannot even dream that such a thing can take place with you. Only then do we realize that there are steps we can take to increase safety. If you are looking for rugs and carpets for your home and would like to choose rugs made using natural green material then you can check that out with Rugs Toronto. They have a large range of rugs and carpets of all sizes & shapes from all over the world to meet specific requirements.