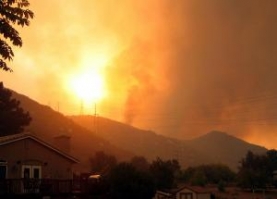 The California Public Utilities Commission has announced that its November 29 meeting agenda in San Francisco will include SDG&E’s proposed Wildfire Expense Balancing Account (WEBA), the utility’s proposal to charge ratepayers for uninsured costs of wildfires.

But the Mussey Grade Road Alliance, a Ramona citizens group, has filed a request asking the commission to move the meeting to San Diego.

The CPUC previously held a public participation hearing on the WEBA application ion San Diego in April 2012.  Over 800 area residents attended and the overwhelming majority asked

the assigned Commissioner Timothy Alan Simon and Administrative Law Judge Maribeth Bushey not to allow SDG&E to charge hundreds of millions of dollars for  2007 wildfires that scorched Ramona, Rancho Bernardo, Rancho Santa Fe and Fallbrook and which were caused by the utility’s power lines.

Simon and Bushey recently issued conflicting decisions on the matter, as ECM reported.  The full CPUC can choose one or the other option, a combination of both, or something else entirely.