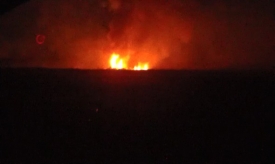 February 1, 2012 (Ramona) – The California Department of Fish and Game announced today that its wardens have arrested Jacob Thogmartin, 26, of Ramona on suspicion of setting a fire in a wildlife area filled with hunters early Saturday morning. The blaze, which extended into the night, charred 650 acres.

Wardens observed Thogmartin coming out of the brush without a weapon and acting suspiciously just outside of the Wister Wildlife Area in Imperial County, according DFG. When the warden contacted him, flames burst from the brush behind him. Thogmartin had received a citation for driving on a closed road inside the wildlife area and was given a warning for collecting firewood the day before.

Thogmartin was immediately detained and other wardens evacuated 20 hunters, five vehicles and one camper trailer that were in the path of the fire. More than 300 hunters were in the wildlife area at the time. No injuries were reported from the fire.

“A fire in a wildlife area filled with hunters could have been disaster,” DFG Assistant Chief Paul Hamdorf said. “The wardens quickly apprehended the suspect and ensured everyone was evacuated safely.”

Thogmartin was turned over to Imperial County Sheriff’s deputies and booked into county jail for felony arson.