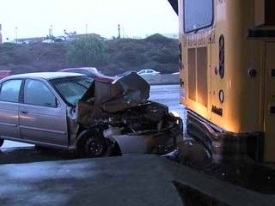 December 13, 2012 (Ramona) – A school bus mechanic, 32, from Ramona has died of injuries following a collision .  The mechanic was working to repair a San Diego Unified School District bus that had broken down on the right shoulder of I-805 southbound under El Cajon Boulevard at 6:55 a.m. when a 2005 Nissan Altima driver lost control in heavy rain and slammed into the bus.

According to the California Highway Patrol, the Nissan driver, a 41-year-old woman, lost control due to her speed on the wet roadway. Her vehicle struck the rear of the bus, trapping the mechanic in the engine compartment and causing serious injuries.

The mechanic and the driver of the Nissan were both transported to Scripps Mercy Hospital with traumatic injuries. The mechanic was pronounced dead at the hospital. His name has not been released pending notification of family.

No students were on board the bus when the accident occurred.