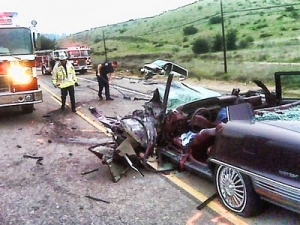 Emergency responders included the Lakeside, Santee and El Cajon Fire Departments, Mercy Air, and the California Highway Patrol. Both drivers were trapped in their vehicles and required extrication by emergency workers, according to Captain Scott Culkin of Lakeside Fire.

Medics performed CPR but were unable to revive Hale and she was pronounced dead at the scene.  According to the Coroner's office, she lived in a Ramona apartment with her infant son and boyfriend.

The driver of the Oldsmobile, John Hallaway, 51, of Las Vegas, suffered major injuries and was transported to a trauma center by helicopter. According to the San Diego Union-Tribune, Hallaway told medics he does not remember what happened but thinks he fell asleep. Several other drivers reported swerving to avoid his vehicle, which was reportedly traveling in the wrong lane for about a quarter of a mile.

Both drivers were wearing seatbelts. There was no indication of drugs, alcohol, or speeding.

State Route 67 was closed for about an hour during the investigation. The highway has been the scene of many fatality accidents in recent years.