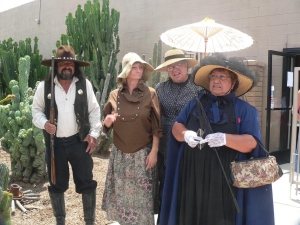 The living history encampments and gunfighter skit competition will be held Saturday, May 9 from 9 a.m. to 5 p.m. and Sunday, May 10th from 9 a.m. to 3 p.m.  There will also be a Living History Encampments School Days for local school children (by reservation only) May 7th and 8th

Hosted by Ramona Old West Days and Guns of the Round Table, the encampments will feature people representing the conditions people endured in the 1800s including mountain men, pioneers, Civil War soldiers and cowboys.

Mountain Men, rugged individualists who ventured forth into the Western wilderness, who provided a wealth of wild animal hides for the gentry both on the Eastern Seaboard and in Europe.  The Mountain Men were famous for their Rendezvous gatherings from 1825 to 1840.

By the mid-1800's, pioneer families began to venture west.  The desire for free land was calling and the most adventurous left everything they had behind, traveling for months, many towards the Oregon and California areas.  Examples of these adventurous families are presented in their stop-over and temporary living settings.

A freeze overtook this expansion West in the early 1860's when the most horrific war of our great nation began.  The Civil War took the entire country’s attention from 1861 to 1865.  The War consumed the lives of hundreds of thousands of fine men and women.  The Civil War encampments present an opportunity to see how the Armies and uprooted Civilians lived during this horrific time in our history.

After the War, many families bankrupted, believing they had no future in the east, packed up and moved west in hopes of a better life.  Large numbers of single men ventured west.  Lacking actual moneys, but willing to work hard, many discovered thousands of head of long horn cattle.  Stockyards were built at railheads, cattle drive routes were created and in the late 60’s thru the 70’s cattle was king.  'Wild West towns' popped up across the country and the 'American cowboy culture' was born.  You can see a traveling tent saloon, cowboy life as it existed on the plains, and the arrival of civilization in the presence of the Law….

You’re invited to step back in time, tour the encampments, listen to their stories, ask questions, take pictures and join in the celebration of our rich American History.

Virtually everything you see is authentic and correct to the time.  Items have been carefully researched and collected over many years by each participant.

New this year is the gunfighter skit competition on Saturday and Sunday. You will be entertained by some of the best skit groups on the West Coast.  Each group will perform self written skits, showing the best and worst of the Old Wes—comedies dramas, melodramas, history and more.  These groups will be pulling out all the stops as they compete for first place in the skit competition.