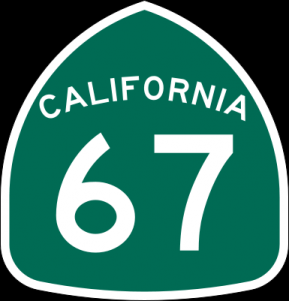 April 24, 2017 (Ramona) – State Route 67 between Ramona and Lakeside is one of the most accident-prone stretches of highway in San Diego County.

Caltrans is planning to install flexible posts between Willow Road in Lakeside and Shady Oaks in Ramona at a cost of $7.14 million in hopes of preventing head-on collisions.

But at a March 30th meeting, Ramona Planning Group members pushed for a permanent barrier between Cloudy Moon Drive and Mt. Woodson that they believe will better protect public safety.

But thus far, Caltrans has balked at the idea of a permanent concrete barrier, due to issues that include limiting egress and visibility, costs to widen the road and drainage concerns.  Evacuation during a disaster could also be impacted, according to Caltrans.

Another option being explored is a high-tension cable down the center median.

Caltrans has long talked about widening highway 67, but now claims it can’t find documents related to that proposal, the Ramona Sentinel reports.

So for now, those plans appear to have fallen by the wayside.