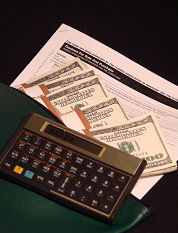 FBI seeks additional victims of scheme
By Nadin Abbott
July 25, 2012 (Ramona)-- The Federal Bureau of Investigations (FBI) has announced that Terese Rose, a local real estate agent, was charged with “devising and executing a mortgage loan origination fraud and kickback scheme.” The charges, filed in May, were unsealed July 12 and reveal that Rose pled guilty to conspiracy charges.
Others charged were loan broker Mary Armstrong and Armstrong’s assistant William Fountain. These three worked by “recruiting “investors” through advertisements in the Los Angeles Times and online and encouraging them to purchase homes in Ramona, California, and elsewhere.”  A fourth defendant, Justin Mensen, also pled guilty.
The indictment alleges that the defendants bought at least 16 properties on which values were highly inflated, well beyond market value. The money was then diverted to their bank accounts. No improvements were ever made on the properties.
According to the FBI, among other things, the loan applications falsely claimed exorbitant income from fake employers and used sham companies to verify the borrowers’ fabricated employment and rental histories. The defendants went so far as to include fake W-2s and pay stubs to support the income claims. The defendants used these loan applications to obtain mortgages with 100 percent financing and thus avoided having to make any down payment on the properties.
The bulk of the profits the defendants made from the scheme resulted from their convincing sellers to inflate the purchase price of the properties by approximately $100,000, which was allegedly to be used for construction to improve the properties. In fact, no construction work was ever performed and the funds were instead diverted (or “kicked back”) to bank accounts controlled by the defendants. The defendants pocketed this money, made few if any mortgage payments, and allowed nearly all of the properties to swiftly fall into foreclosure.
http://www.fbi.gov/sandiego/press-releases/2012/four-charged-in-11-million-loan-origination-scheme-ramona-real-estate-agent-and-seattle-businessman-enter-guilty-pleas
One of the local victims to this scheme was Juanita Torres’s family. Her involvement began on March 21, 2007. In the case of the family, Rose “took advantage of our elderly parents,” Torres said. She added that the schemes also ended in “our elderly parents losing their 55 year old home, which they worked hard to pay off.”
Eventually the Adult Protective Services office out of El Cajon was involved, determining that there was criminal predatory lending, forgery and fiduciary elder abuse on behalf of Teresa Rose.

If you were affected by this, the FBI would like to talk to you.