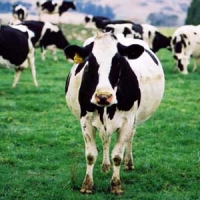 “I feel like there are not enough vets practicing in California in this (livestock) discipline,” said Glasgow. “With all the technology available, I hope to focus on establishing better herd health practices and move away from just treating sick animals. Livestock has always been a passion of mine and I look forward to reaching my goal of helping animals that are sometimes overlooked because they are not considered a ‘pet.’”

Agriculture was also a passion for Leo McGuire Sr., San Diego County Farm Bureau’s 2004 Farmer of the Year and its longest-standing member dating back to 1950. He was an inventor, entrepreneur and collaborator with a strong work ethic and a willingness to experiment with new technologies and techniques on his own Fallbrook farm where he grew cherimoyas and avocados. After his death in December 2007 at age 89, the family established a memorial fund with the San Diego County Farm Bureau from donations received, asking that the SDCFB Scholarship Committee award the funds to a deserving local agriculture student

“My father was a fearless innovator, willing to try new things that could help the agriculture industry,” said Leo McGuire Jr., who now runs L&M Fertilizer and Power Equipment (www.landmpower.com), the agricultural supply business started in 1958 by his father, with stores in Fallbrook and Temecula. “He also had a soft spot for youth and a desire to support their educational pursuits,” he added, noting that his father attended UCLA on a football scholarship in the 1930s until injured ligaments took him off the field and cost him the scholarship and completion of his education. “Dad would be proud that a scholarship was given in his memory to a driven and deserving college student dedicated to a career in local agriculture.”

The SDCFB Scholarship Program began in 1999, with the primary source of scholarship funds coming from private donations and named scholarship awards. The balance is raised from the organization’s annual fall Scholarship Golf Tournament, scheduled this year for Thursday, Sept. 16 at San Luis Rey Downs in Bonsall.

San Diego County Farm Bureau is a nonprofit trade organization with more than 7,000 members. It has operated since 1913 with the mission to represent San Diego County Agriculture through public relations, education and public policy advocacy in order to promote the economic viability of agriculture balanced with appropriate management of natural resources.