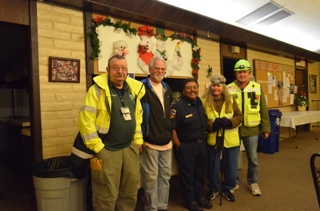 December 22, 2012 (Ramona)--The temperature was quickly dropping and the car thermometer read in the upper thirties as I talked to Janine outside her mobile home late last night She is a resident of the Ramona Terrace Estates, which lost propane yesterday due to a major leak.

Janine, who did not provide her last name, is worried since they will not get gas power restored until Christmas Eve. It will be cold for the next few days, and among the residents is her father, who lives in one of the units that are "propane only," so right now he is using a space heater to keep warm.

She is also very grateful for all the help they have received from the fire department, the Sheriff personnel, and the Community Emergency Response Team (CERT). She is aware of the Red Cross Shelter that was opened to offer residents a warm meal and a warmer place, but has not taken advantage of that option.

Seeing me shiver, Janine offered me a cup of hot tea.  Her home has electricty, thus she can keep warm.  But propane-only units have fewer options. She shared her worries and that some of her neighbors are being somewhat stubborn about leaving for a warmer space.

But Janine concluded, this is a community and "we all take care of each other."

According to Dave Smith, the maintenance person, the place has 270 spaces. Fortunately 70 of the neighbors are away with family for the holidays. This is a senior community where the average resident age is 70, with some as old as 90 and others as young as 55. "Everybody is in good spirits, and everybody is calm,” Smith said.

According to Battalion Chief Saul Villagimez from Cal Fire, the agency is concerned for the welfare of residents and has offered shelter, food and water, though the Red Cross. (The shelter is at Olive Pierce Middle School, at 1521 Hanson Lane)

"A few of the Residents were identified at risk and were asked to evacuate for their safety, and they have," the Chief said, adding that the evacuation itself was managed by the Sheriff’ss department. He added, “People who are not at risk of life and safety were advised of different options.”

Shelley Stefanyszyn of CERT said that they would help as needed. One of the residents is actually a member of the Ramona CERT.

Frank Houde, manager of the shelter for the American Red Cross, said that "the shelter is ready to go." But when ECM visited the shelter at around 8 p.m. it was empty of residents.  Hot water and coffee were available at the shelter and volunteers were ready to serve hot food as well. As I left, the canteen unit was getting ready to leave, and come back in the morning to get breakfast going.

Houd noted that seniors were afraid to leave their homes, but that a couple did come earlier in the night to check the shelter out.

Here in East County, where residents tend to be ruggedly self sufficient, it appears that most or all of the 270 residents left without propane gas have opted to stay home in the cold, find other options to keep warm, or take shelter elsewhere while awaiting restoration of gas that may be off until shortly before Christmas.