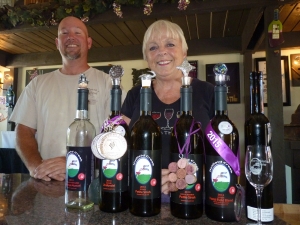 Update April 23, 2016:  County staff has responded to ECM questions on this issue.  View their response here.

April 20,2016 (Ramona) –  Leaders in Ramona’s burgeoning wine industry warn in correspondence to Supervisors that Ramona’s wine industry could die on the vine as a result of changes proposed to the County’s Boutique and Small Wineries Regulations.

The changes are set for hearing by Supervisors on Wednesday, April 27 at 9 a.m. at the County Administration Center (Room310, 1600 Pacific Highway, San Diego).  View agenda and hearing announcement.

Two versions of the ordinance will be up for consideration, one approved by the Planning Commission, the other a recommendation by staff of Planning & Development Services. One important note: legal challenges may be limited only to issues raised at a public hearing or in written correspondence delivered to the hearing body at or before the hearing, according to the hearing notice.

A key difference is that the latter would ban wineries from importing any wine, even for emergencies such as the earthquake that devastating vineyards in Napa Valley. Since San Diego is primarily a red wine producing area, wineries would not be allowed to serve up chardonnays for winery guests to sip.

But Elaine Lyttleton, owner of Hatfield Creek Vineyadrs and Winery told ECM in an email today, “It’s not just about this ordinance. It’s about the culture of non-cooperation,” referring to the County’s Planning & Development  staff.   She faults staff for having “no clue whatsoever about economic development…and how to make it happen here to create jobs and economic prosperity for everyone in the County including government employees, entrepreneurs, and their employees.”

Lyttle, in a letter sent to Supervisors, writes that “staff is telling us to close our tasting rooms” to comply with a myriad of regulations too costly for small winery owners such as ADA compliant toilets and refusing permits for winery production buildings “formerly known as the shed or garage….We are not Napa billionaires,” she states. “We already know several grape farmers who have abandoned their dreams of having a Boutique Winery because of staff’s unending demands. Your grand experiment to create jobs and a vibrant wine industry to attract tourists and their sales tax dollars to our County coffers is being poisoned by County staff who have never run a business…”

She adds that her winery, opened in 2014,  grossed just $43,000 last year – not enough to live on, so she and her husband both work full-time jobs during the week . That means they’re working seven days a week, earning less than minimum wage overall.  So while Supervisors praised the wine industry  boom, staff “cut it off at the knees. For what? Little tiny wineries who are producing less than 1,000 (usually less than 500) cases of medal-winning wines a year. Your priorities are wrong.”

Micole Moore, president of the Ramona Valley Vineyards Association (RVVA) and winemaker at Ramona Ranch and Winery, says he worked with the Ramona Community Planning Group and others to develop suggestions to improve the proposed ordinance, which were passed by the County Planning Commission.

“Unfortunately, a small fraction of Ramona continues to sabotage the industry,” he wrote in an email to RVVA members. He indicated he would meet with Supervisor Dianne Jacob this week among other actions.

Perhaps the most scathing denunciation came from Tammy Rimes, owner of Hacienda de las Rosas Winery and former Director of Purchasing & Contracting for the City of San Diego.  “I’m appalled at the lack of customer service and ethical displays by your own Planning team in regards to the upcoming Winery Ordinance update,” says Rimes, who along with her late husband, William, put in hundreds of hours helping to write the initial ordinance.

Rimes says the updated ordinance was crafted to provide a “good balance” between all parties along with “flexibility to be open to economic development and small business support.”  She says the alternative that staff drafted on its own is “much more regulatory oppressive and hinders the smallest wineries from being able to make a profitable business enterprise.”  A national speaker at government conferences, she added that she will be adding a slide to her presentation on motivating government employees to use San Diego’s planning section as “the nationwide example of how NOT to provide customer service.”

She says fulfilling her husband’s dream of opening a winery in Ramona took thousands of hours and many meetings—battling county regulators all while William was fighting cancer, which ultimately claimed his life.  “I will not be attending the upcoming Board meeting, because frankly, I just can’t take the drama and negativity regarding this whole process and the County team’s lack of respect for our local winery and vineyard community,”  Rimes said, adding that she fears retaliation for speaking out.

If more restrictions, regulations or expensive requirements are imposed, she concluded, that will “most likely move me toward the decision of possibly closing the family business.”

Eric Metz from Lenora Winery, in an email to Lyttle, says he, too, has not yet attained profitability after sinking hundreds of thousands of dollars into the business largely to comply with onerous county regulations.

“I agree that all of us have been led down a road of false promises by the County in that they touted the Boutique Winery Ordinance as a”by-right” ability to do business as a winery,” Metz writes. “But the Planning and Development Services Department was against it from the very beginning. Now their actions are out in the open for all to see. The County let us think that our by right entitlement to conduct business as a winery was like that for any other place within the State of California.” He claims that County staff “intentionally misled County residents in order to achieve their hidden agenda of having residents invest financially into this emerging industry.”

He wants to know why the County isn’t allowing wineries to operate by-right in the manner of other wineries “throughout the state of California.”

..is totally out of touch with the "real" world. their real motto should be ...Maximize Revenue. The current one about the public good is BS.

or run a B&B or operate a winery, the local bureaucrats will kill you. That's just what they do, in order to maintain their empires and income. Foreign companies can come into East County and despoil our environment with their grand projects under all kinds of waivers, but when the small residents and entrepreneurs try to build anything from a garage to a winery business it's "no" this and "no" that. It's how they get their kicks, apparently. Why should they care? They're busy feathering their own autocratic nests.
Truthfully, Why 'Bernie Sanders Matters' is one book that I would never had given a second glance, let alone remove from a shelf to browse. For one reason, I am not a Bernie Sanders fan. Two, though I am registered as an independent, like Sanders, I lean more toward non-conservative republican. Even setting aside my political views, more than likely my having an inkling of interest reading about Bernie ... well, to be kind, would still be next to nil. Now, my point to these statements, Dennis? Simply, your review of such a non-interest topic, to me of course, has elicited The spark, the curiosity factor that would not have otherwise been stimulated. Your thorough in depth references ... I must admit, challenged my peripheral regarding anything 'Berni'. Will I purchase the book? Maybe is the only honest answer I can give. But think of it this way, it is much more than 'nil' and a guarantee that I will now remove it from a shelf to at least browse, as I sip my coffee. Thank you for sharing 'another view'. Donetta Lozzi DiZoglio
Politicians talk all the time about reducing regulations to help business. But where are they when we need them? After taking the time to read this article I'm shocked and appalled that my small business wine making neighbors in Ramona are being destroyed by local bureaucrats who think they know better. The Planning team has decided we need more oppressive regulations for our nascent wine industry? This will kill a budding industry that is creating jobs we desperately need in East County. I will fight for this important industry even if it means working in the assembly to get a state law that supersedes this local County ordinance stupidity. I plan to attend the April 27th meeting. I will ask my neighbors and others to attend too. We need to work together to help our local business or it will die. I am looking forward to attending the Board meeting on April 27th. I expect it to be an interesting meeting. Tony Teora Candidate for State Assembly 71st