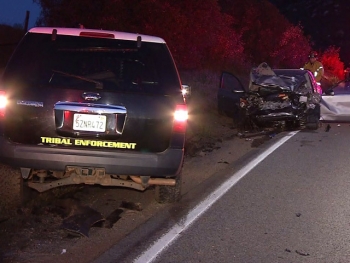 March 16, 2014 (Barona) – Graciela Bustos, 53, of Ramona died at a local hospital of injuries sustained earlier in the evening on March 15 in a head-on collision.  The crash occurred at 6:37 p.m. on Wildcat Canyon Road on the Barona reservation.

The vehicle that swerved over the center line and caused the deadly crash was reportedly driven by a Barona tribal enforcement officer who was on duty at the time, a Cal Fire official told the Ramona Sentinel.  Bustos was a passenger and was wearing a seatbelt, the Medical Examiner reports. The driver of the vehicle carrying Bustos was seriously injured, sustaining injuries to his face, arm, leg and hip, according to the Ramona Sentinel.

Drugs and alcohol were not believed to be involved. The California Highway Patrol is investigating the fatal crash, which shut down Wildcat Canyon