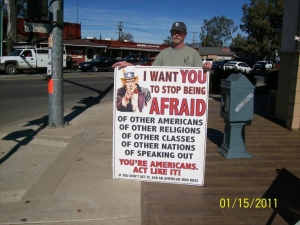 "Like an unchecked cancer, hate corrodes the personality and eats away its vital unity. Hate destroys a man's sense of values and his objectivity." --
Martin Luther King, Jr., 1963

January 17, 2011 (Ramona) – Ron Selkovitch and Dave Patterson of the Ramona Forum demonstrated in Ramona over Martin Luther King Day weekend. According to a press release issued by the group, the purpose was to call for “civility and courage in the face of the recent shooting and political rancor.” 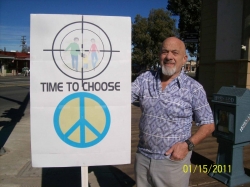 One sign, reading "Time to choose", depicts a sniper's gunsight and a peace symbol.   Patterson, a veteran, chose a sign that asks Americans to stop fearing people of different backgrounds. "You're Americans. Act like it!" the sign urges.

The group's action echoes President Barack Obama's call for civil discourse and a toning down of incendiary rhetoric in the wake of the Arizona shooting that killed six people including a federal judge and a nine-year-old girl, also injuring Tucson Congresswoman Gabrielle Giffords.

The Ramona group's message of tolerance, ironically, occurred the same weekend that hateful messages were delivered in another San Diego community, Rancho Penasquitos, where swastikas and satanic symbols were spray-painted onto 14 cars as well as properties at parks and public schools.