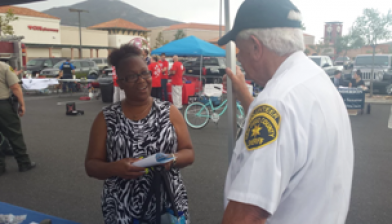 August 7, 2017 (Rancho San Diego) -- Cities across San Diego celebrated the National Night Out Against Crime on Tuesday, Aug. 1st. The Rancho San Diego Command hosted an event in the Target parking lot, where community members and police officers grilled hot dogs and visited booths. The National Night Out Against Crime is part of the wider public outreach strategy utilized by the RSD Command.

“We’re really involved in community policing. We take a lot of pride in doing a lot of outreach through faith-based and through community groups,” said Captain Marco Garmo. “Community outreach is so, so important. It’s just as important as putting bad guys in jail. They hold equal ground. We have to put resources towards it.”

The event  has been a national tradition since 1984. This year’s event was held on a day filled with mugginess, showers, and flash flood warnings which may have dampened people’s desire to attend. The small crowd allowed the people running the booths to visit each other and socialize with the deputies in attendance. 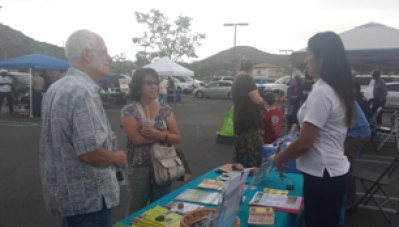 “As far as this event goes, what’s great about this is people get to come up and talk to us and realize we’re just like everybody else. We’re human beings and we have the same likes and dislikes. We look like everyone else. We’re approachable. We’re normal, average people. We’re not running around looking for someone to arrest or write a ticket,” Garmo said.

He stressed the importance of community members having a relationship with police outside of an enforcement posture. He believes only seeing law enforcement when they are taking people to jail creates the distrust of police that can put residents and officers in harmful situations.  Through this event, he said, “They realize there’s more to us than just putting people in jail.”

Events such as the Night Out Against Crime do more than simply informing residents what services are available to them and the people providing those service. It also connects residents to new opportunities to serve their communities.

Lisa Powell attended another event hosted by the department, “Coffee with the Community,” where she first learned about the Casa de Oro Alliance. Through that event, she is now an avid member of the alliance which is working to revitalize Casa de Oro.

John Kline began volunteering in the department three years ago so that he was busy after retiring from IBM and quickly worked his way up into being the administrator who does the scheduling and leads the volunteers. He greeted people at the Senior Volunteer booth while touting the important role the volunteers play during the six hours, though often more, they patrol. “It’s a good bunch of people we have,” said Kline. According to Kline, the Rancho San Diego Command covers the biggest geographic area in the County which makes their assistance to the staff invaluable.

In the geographic area covered by RSD Command, there are also a variety of groups officers must be prepared to interact with. “We are the most diverse Sheriff’s jurisdiction within the entire department. The area we’re in now is one of the largest Iraqi populations within the United States. The Lemon Grove station falls under the Rancho San Diego Command, so Lemon Grove has the Somali community and actually has an Islamic mosque. Spring Valley is 12% African American where the county average is six percent, so we have twice the county average of the African American community,” said Garmo.

As Captain, Garmo has made sure that his officers are culturally aware and remain sensitive to the needs of the people they serve. “We’re very constitutional in the way we police in this region…it is very important that my deputies and myself put out a very positive image and to change that narrative and to give people a more positive perception of law enforcement,” he said.

The event came a few days after President Donald Trump joked in Long Island that police should not worry about injuring suspects when they are arrested, which drew widespread criticism from advocates against police brutality.

“Donald Trump is not a cop and he is not from the law enforcement community. He’s a wealthy businessman. Although I do respect him as our president, and the support he gives the law enforcement community, I don’t really think he’s in the position to be making those types of statements,” Garmo said. The department already has a “force plus one” policy in place, meaning that if someone swings at an officer, the officer can use a baton, taser, or pepper spray. Garmo said, “I believe force should be used in accordance with the force being used. He’s (Donald Trump) not going to change the way we do business.”

San Diego County Sheriff Bill Gore has already stated that police will not be acting as immigration officers despite the change in Department of Homeland Security rules under President Trump.

“Our immigration policies are not changing. We do not ask people their immigration status. That is not our business. We are here to serve people in San Diego whether they are here legally or illegally,” Garmo said, “The last thing I would want, because I come from an ethnic community myself-- I’m a first generation Chaldean Arab-American, and the last thing I would want in my community is people fearful to report a crime and allow themselves to be victims for fear of being deported. That’s not our place.”

Garmo sees the success of community engagement in every year they do not have a situation such as that which occurred in Ferguson, Missouri, where riots occurred following the shooting of an unarmed black youth by a white police officer.

Last year, RSD Command witnessed neighboring El Cajon, which is in the Sheriff’s jurisdiction, face a wave of protests after the officer-involved shooting of Alfred Olango.

Community outreach is “very important because if the community doesn’t trust you, when you have a questionable shooting, they’re not going to give you the benefit of the doubt. They’re going to wait for something like that so they can attack you regardless of whether the cop did right or wrong. It becomes about `All we ever see you guys do is arrest us, so now we have something to latch onto and protest and talk about.’ It really doesn’t ever become about that incident. It’s a bigger problem. And if law enforcement agencies don’t see that, they’re way behind the times,” Garmo concluded.