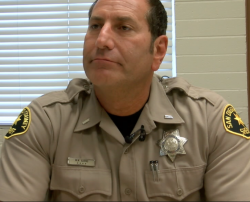 February 14, 2019 (Rancho San Diego) -- Capt. Marco Garmo, who most recently headed up the Rancho San Diego substation of the San Diego County Sheriff’s Department has been placed on an administrative leave until further notice, according to ECM news partner 10News.

On the same day that the U.S. Bureau of Alcohol, Tobacco, Firearms and Explosives and the Federal Bureau of Investigation (FBI) conducted raids throughout San Diego County, including the large sprawling Jamul estate of San Diego jeweler Leo Hamel due to a firearms trafficking investigation, Garmo was put on leave. The Rancho San Diego substation covers the same area of Hamel’s property.

Sheriff Gore, in a e-mail obtained by 10News yesterday, states that he was made aware of potential criminal conduct by Garmo by a senior member of the Sheriff’s Department, and implies that the removal of Garmo is linked to the broader federal investigation involving Hamel’s properties.

The e-mail said, in part, “The FBI along the Bureau of Alcohol, Tobacco, Firearms, and Explosives (ATF) opened a criminal investigation. Today, with the knowledge and cooperation of the Sheriff’s Department, those federal law enforcement agencies served a number of search warrants including one at the Captain’s office at the Rancho San Diego station.”

Garmo received a written reprimand by Sheriff Bill Gore in 2017 for violating state limits on gun sales. He also received a warning from then District Attorney, Bonnie Dumanis, not to engage in any more unlawful firearm transactions. The reprimand, dated Feb. 1, 2017, accused Garmo of selling 11 handguns in 2014, eight handguns in 2015, and 25 handguns in 2016.

The excess gun sales were investigated by the California Department of Justice who in turn referred the case to Dumanis. According to the reprimand, selling more than five handguns a year violates state law.

Garmo, 51, who joined the department in 1992, is being temporarily replaced by Capt. Charles Cinnamo, who most recently headed up the SDSO Vista station. Garmo’s name has been removed from the substation’s website and replaced with Cinnamo’s name.

The San Diego Union Tribune’s watchdog reporter, Jeff McDonald, reported in April 2018 that Garmo gave $200 to the Re-Elect Sheriff Gore 2018 in Dec. 2017. After Garmo’s personal donation, his family contributed six contributions of $250 each in November. According to election filings, the contributions totaled $1,700.

Garmo in an e-mail to McDonald, wrote that the Sheriff started fundraising long after the investigation had taken place.

Although Garmo wrote, “I committed an obscure misdemeanor that is unknown to most, even those in the gun community,” the Union Tribune’s investigation found that he had bought and sold more than 150 guns in recent years.

“I’m a gun guy,” Garmo said to the Union Tribune in 2017. He estimated that he had bought and sold about 30 firearms over his career. “I’m not making excuses. It’s a mistake that’s probably commonly made. My intentions were not to violate the law. The minute it was brought to my attention, it stopped happening.”

who knew the sheriff's dept. was in the business of gun sales? Not I. Capt. Garmo's main market area =where?

A law enforcement officer - breaking the law, then minimizing what he did as if it was no big deal.