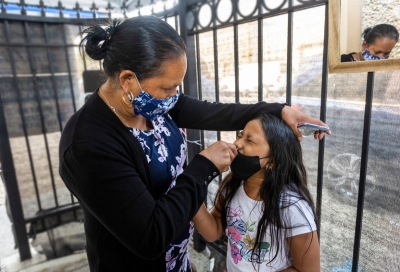 September 27, 2021 (San Diego) - Sarah Voit likes to keep 10 to 15 rapid test kits on hand in case any of the residents of the Family Emergency Shelter Coalition in Hayward need to be tested for COVID-19. They’ve had some infection scares, and the antigen tests — which return results in minutes — have been crucial to curbing the virus in the family shelter.

But in recent weeks, the staff has struggled to purchase enough rapid test kits. The local Walgreens and Costco have started limiting sales to one per customer. “We ran into the same issue at the beginning of the pandemic when we were trying to buy Clorox wipes and hand sanitizer,” said Voit, the shelter’s program director.

Three weeks ago, a child living at the shelter was sent home from school after a classmate contracted COVID-19. Voit’s team used the rapid tests on the whole family. They all came back positive.
“Because we had those kits on hand, we were able to send them immediately to the isolation and quarantine hotel the county runs,” she said. “Otherwise it could have taken three to five days to get those results and many more families could have gotten sick.”
A nearby clinic offers COVID-19 tests, but only PCR tests, which usually take several days for results. Even a single day’s wait could fuel an outbreak among the shelter’s 23 adults and children.
“If a resident really needs a test, we can send them there,” Voit said, “but the three to five days is tough to wait.”
Voit managed to find an online supplier and ordered 70 kits for the shelter, but they aren’t coming anytime soon: The delivery date is a month out.
Online and in stores, major retailers are sold out of the popular at-home tests, and medical supply vendors can’t find enough rapid test kits for schools, shelters, nursing homes, employers and other groups. Across the state, people in low-income communities are being turned away as community groups and clinics are forced to ration their tests. Workers in need of regular screening for employment struggle to find them. Some parents are spending hundreds of dollars out-of-pocket to test their school kids. And nursing homes are told they may have to wait weeks for testing kits.
“The U.S. gets a D- when it comes to testing,” said Dr. John Swartzberg, an infectious disease expert and professor emeritus at UC Berkeley. “We’re not doing enough of it and it’s too difficult for people to get tests. Those with the least resources have the greatest difficulty in finding a free test site or purchasing at-home testing.”
Experts say quick and easy testing is vital to contain the spread of COVID-19. Without widespread access to tests, people don’t know they are infected and need to quarantine, causing outbreaks that could have been prevented.
“There should be little stations where you can get rapid tests anywhere, anytime,” said Joe DeRisi, professor of biochemistry and biophysics at UC San Francisco.
Rapid test kit shortages abound
It’s a mismatch of supply and demand. Although the state is reporting record-high testing numbers, Californians seeking same-day results and over-the-counter test kits for sniffling kids, employer verification, or merely peace of mind say they are unavailable. The problem: Nearly all state-run testing facilities offer only laboratory-based PCR tests, and people want rapid ones instead.
When the Delta variant reared its head, the shortage of rapid tests created the “perfect storm,” experts say. The surge coincided with schools reopening and employers requiring quick, routine testing. At the same time, local health departments scaled back their testing efforts, focusing on vaccinations instead. Manufacturers, seeing decreased summer demand, reportedly shuttered production lines and tossed unsold product.
Fewer than 10% of testing locations across the state now offer rapid-result antigen tests, according to a database from Coders Against COVID and URISA GISCorps.
The test shortage is so severe that the federal government has stepped in to increase production. On Sept. 9, the Biden Administration announced a national COVID-19 action plan that includes the purchase of 280 million rapid point-of-care and over-the-counter tests by the federal government and a three-month deal with Walmart, Amazon and Kroger to sell the tests at cost.
The U.S. Department of Health and Human Services did not respond to requests inquiring how many rapid tests would be allocated to California. 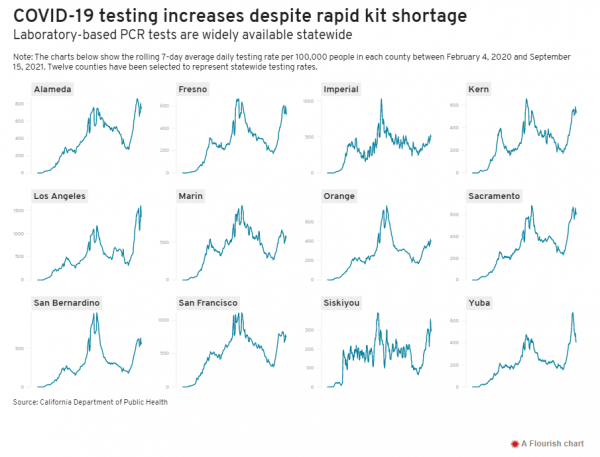 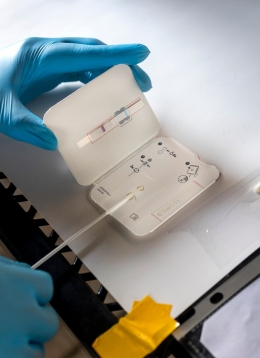 Photo, left:  a rapid antigen COVID-19 test is used on patients at Canal Alliance’s test site in San Rafael. Photo by Penni Gladstone for CalMatters
Working-class and immigrant communities that often face technological or language barriers are struggling with the shifting test locations and longer turnaround times. Community organizations have been left to fill the gaps with what little supplies they have left.
“We’re still the only organization in Marin County that’s doing rapid testing for free, and I don’t understand why,” said Yolanda Oviedo, COVID-19 response manager at Canal Alliance. “It’s been really hard for us to maintain.”
Canal Alliance, which provides an array of services for the Latino community in Marin, offers rapid testing two days a week.
The pandemic hit the county’s Latino population hard. Latinos accounted for 80% of the county’s COVID-19 cases last year despite making up less than 16% of the population. Most are essential workers with high risks of exposure.
Oviedo said the group received 5,000 test kits from the state in May and have used more than 3,000. Demand has grown since August, and they have resorted to limiting testing to 100 people per day in order to make supplies last as long as possible.
People seeking tests at the site are frequently turned away. It’s a tough decision, especially when they know community members are desperate, said Marina Palma, San Rafael City Schools board member and volunteer at Canal Alliance.
“We have people coming to test with us from Richmond, Petaluma, Novato, San Francisco,” Palma said.
Increasingly, employers, like Amtrak and Goldman Sachs, are requiring proof of vaccination or negative test results, and many workers can’t afford to miss a day of work.
“When you go to other places, it takes two days for the results. Two days means a lot for those families who work labor,” Palma said. “If they don’t have that verification, they can’t support their families.”
It’s a similar story in the Central Valley, where Martinez, the Clovis parent, is the executive director of the Central California Environmental Justice Network. Her organization, which partnered with UC Davis, is the only place in Yolo, Stanislaus, Madera and Fresno counties offering rapid tests.
Several weeks ago they, too, started capping the tests at 100 per day.
“When I heard we were capping (tests), I asked ‘Why don’t you order more?’ They said ‘There’s no more to order. They’re on backlog,’” Martinez said.
Many of the people they test have Medi-Cal or are uninsured, and are unable to get appointments at local health clinics. Routine testing for employers isn’t necessarily covered by insurance.
Everyday around 5 a.m., people start calling Martinez, desperately searching for a free test. “It’s bureaucracies after bureaucracies. It’s exhausting,” she said.
Our health care reporting is supported by the California Health Care Foundation, Blue Shield of California Foundation, California Wellness Foundation, and the California Endowment.