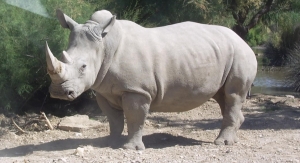 August 7, 2017 (San Diego) -- Only three northern white rhinos remain on earth – and none of them can breed.  But thanks to scientists at the San Diego Zoo, this rare rhinoceros species may yet be saved from extinction.

At the facility’s frozen zoo, tissues from thousands of animals descended from a dozen different northern white rhinos have been stored in nitrogen tanks – the last hope for this species to survive.

Now scientists hope to turn those tissues into pluripotent stem cells, which are capable of being turned into any type of cell or tissue – including eggs and sperm.

The ambitious project aims to create embryos in the lab, which can then be artificially inseminated into surrogate mothers – a herd of six southern white rhino females at the San Diego Zoo.

If the ambitious experiment is successful, a new generation of northern white rhinos may soon arise, like Lazarus, from the dead – the first time a species with no breeding members yet has been saved from vanishing forever.