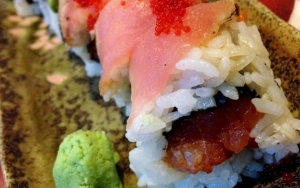 May 23, 2015 (San Diego)--Seven San Diego residents and two visitors to the county have been diagnosed with infections with Salmonella Paratyphi B after eating raw fish or sushi, the County Health and Human Services Agency (HHSA) announced today.

The nine cases are part of a multistate outbreak of Salmonella Paratyphi B variant L(+) tartrate(+) , which according to the Centers for Disease Control and Prevention (CDC) has sickened 53 people in nine states.

There have been no deaths, but ten people have been hospitalized.  Most of the people who have gotten sick people live in or recently traveled to the southwestern United States.

Investigations by CDC, HHSA and several other local and state health departments have not conclusively identified a food source, but nearly all of ill people interviewed reported eating sushi containing raw fish in the week before becoming ill. Many of these people reported eating spicy tuna sushi.

“Anyone with Salmonella symptoms such as nausea, diarrhea, fever and abdominal cramping, especially after recently eating raw ground tuna, should seek medical attention,” said Dr. Wilma Wooten, County public health officer.  “Healthcare providers are advised to get stool cultures from patients who have diarrhea and fever.”

The CDC estimates that various Salmonella strains cause one million illnesses in the United States each year, with 19,000 hospitalizations and 380 deaths. Illness from Salmonella lasts about four to seven days and most people recover without treatment.

Although Salmonella is not common in raw fish, consumption of raw or undercooked meats and seafood can cause foodborne illnesses including Salmonella. The most common sources of infection are undercooked poultry, eggs and meat. Pet birds, turtles and reptiles can also transmit Salmonella.

To prevent illness, wash your hands thoroughly with soap and water prior to preparing or eating food and after using the bathroom. Salmonella can be killed by cooking foods to an internal temperature of 165°F.

People at higher risk for serious foodborne illness should not eat raw fish or raw shellfish, regardless of an ongoing outbreak. These groups include: