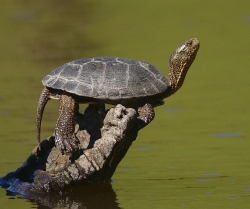 Once abundant along the West Coast from Mexico to Canada,  California’s only freshwater turtles have become rare.  Non-native species such as large-mouth bass, catfish and bullfrogs, along with human poachers, have preyed on the tiny turtles through the years.

But now a joint program with the San Diego Zoo, California Department of Fish & Wildlife, San Diego Association of Governments and the U.S. Geological Survey have led to release of the five turtles, each equipped with miniature transmitters to help scientists track their whereabouts.

The pond where the turtles are released has everything a wild turtle could hope for, according to the zoo’s blog: logs and granite logs for basking, fresh, cool water for swimming, cattails and willows for shade, and plenty of insects and invertebrates to eat.