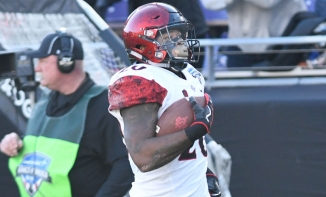 July 18, 2018 (San Diego) - Former San Diego State football running back Rashaad Penny has been named the 2017-18 Mountain West Male Athlete of the Year. He is the first Aztec male to win the award and the second SDSU student-athlete to be recognized, following in the footsteps of track and field’s Shanieka Thomas, who was the 2012-13 MW Female Athlete of the Year.

Established by the Mountain West Joint Council in May 2010, the MW Athlete of the Year Awards are bestowed annually to one male and one female student-athlete who have achieved athletic excellence during the past academic year. In addition to superior athletic achievement, criterion for the MW Athlete of the Year Award requires that nominees be in good academic standing throughout their season of competition, and demonstrate good character and conduct on and off the playing field.

For his efforts, Penny racked up numerous postseason accolades, highlighted by the fifth-place finish in Heisman Trophy voting. Penny was also a Walter Camp Player-of-the-Year finalist, Maxwell Award semifinalist (college player of the year) and Doak Walker Award semifinalist (nation's premier running back), and a consensus first-team All-American, SDSU's third in program history (Faulk in 1992 and 1993, and Turley in 1997). Penny was also named a first-team All-American by Associated Press, FWAA, The Sporting News, Sports Illustrated, ESPN, USA Today, CBS Sports, The All-American and Bleacher Report. Additionally, Penny was named the Mountain West Offensive Player of the Year and the MW Special Teams Player of the Year, the first in league history to win two player-of-the-year awards.

Penny helped the Aztecs finish 2017 with a 10-3 record, which was their school-record third consecutive season with at least 10 victories. SDSU is one of just seven schools in the nation to win at least 10 games in three consecutive seasons (also Alabama, Clemson, Ohio State, Oklahoma, Oklahoma State and Wisconsin).

Penny finished his career with five straight games with at least 200 yards rushing, tying an NCAA FBS record with USC's Marcus Allen (1981), Oklahoma State's Barry Sanders (1988) and North Texas' Jamario Thomas (2014). He had nine MW player-of-the-week awards for his career, including seven in 2017 in 12 weeks (five-time offensive player of the week, two-time special teams player of the week; he was also a MW Special Teams Player-of-the-Week winner once in 2015 and once in 2016) and played in all 54 games since he arrived on campus in 2014.