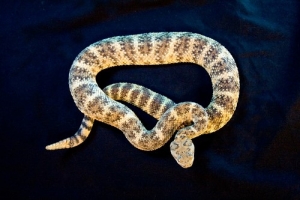 March 14, 2015 (San Diego’s East County) - If you’re heading to the beach to escape this unseasonable heat wave, there’s something more you should worry about besides slathering on sunscreen.

A man at Dog Beach in the Ocean Beach area was bitten by a baby rattlesnake on Saturday.

East County hikers and outdoor enthusiasts have long known to watch out for rattlers when the weather warms up and the snakes come out of hibernation.  But in recent years, snake bites have been occurring even in some central San Diego and coastal communities – and now, even on the sandy shore of a local beach.

Can hiking sticks for beach goers be far behind?

This victim, however, was bitten not on the foot, but on the hand – so keep an eye out not merely while strolling down your favorite beach or trail, but also while sunbathing, too.

It’s a good idea to keep your dog on a leash – since a rattlesnake bite can cost thousands of dollars in veterinary treatments.

If you are bitten by a rattler, prompt medical attention is crucial, since rattlesnake poison is life-threatening if anti-venom is not administered.

KUSI reports that the Dog Beach snake bite victim was taken to a local hospital.

As for the baby rattlesnake, it was killed by another beach goer.  But where there’s one baby snake, others are likely nearby—so if you’re heading to the beach or anywhere outdoors, be sure to watch your step.