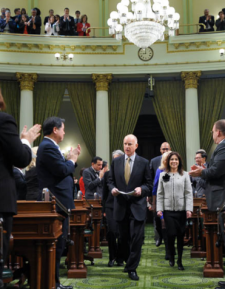 The Governor praised legislators for making tough decisions to cut the budget and reduce long-term pension liabilities. He also thanked voters for passing Proposition 30 to increase funds for schools. In addition he saluted leaders in business and labor for working together to resolve the state’s budget crisis. The state loss 1.3 million jobs in the recession but is rebounding faster than the national average, he noted.The ultimate costs of expanding our healthcare system under the Affordable Care Act are unknown,” he said as an example. California will be providing insurance to nearly a million Californians next year.  The Governor added he is calling for a special session to address issues of getting the Affordable Care Act started and expanding Medi-Cal access.

He called for an overhaul of the California Environmental Quality Act (CEQA) to “streamline our regulatory procedures” and “cut needless delays”, a move that has concerned environmentalists such as the Planning and Conservation League. Locally, that could mean faster approvals of big energy projects.

He stressed the seriousness of climate change, noting that the World Bank has reported carbon dioxide emissions are the highest in 15 million years.  “Tipping points can be reached before we even know we have passed them,” he stated.  Continuing improvement in building standard efficiencies and meeting renewable energy goals from wind and solar are also on his agenda for the future, along with adding high speed rail.

In addition  he voiced support for two tunnels 30 miles long to assure a stable water supply in the even an earthquake, storm or sea level rise should cause the Delta to fail.

The Governor called for changes to the Enterprise Zone Program and the Jobs Hiring Credit, which he said aren’t working. He will also lead a trade investment mission to China.

State Senator Marty Block (D-San Diego) had this reaction to the Governor’s speech. “California is back on the right track, and it’s high speed. The gloom and doom of the recent past are gone, replaced with a hope that happier days are here again.”

But Assembly Brian Jones (R-Santee) said adding a million Californians to Medi-Cal  will fuel a 6.8% increase in Medi-Cal General Fund spending over the next five years.  “Health care reform is expected to drive Medi-Cal costs up between $3-6 billion over the next 10 years,” he noted, adding that a Supreme Court ruling gives the state the option not to expand Medi-Cal and avoid escalating costs.   He also faulted some actions being considered that would increase administrative costs, such as the new California Exchange considering routing calls to 58 county centers instead of through a centralized call center.

The California Labor Federation  issued a statement that it’s proud to join the Governor’s call for more investment in the future, adding, “It’s alsooimportant that we wisely invest taxpayer dollars to create good jobs that will lead to a middle class renaissance.”  The group called for corporate tax breaks should be put to the jobs test; those that don’t create or retain jobs should be reformed or eliminated.

State Superintendent of Public InstructionTom Torlakson praised the Governor for keeping his promise to make school funding his top priority.  “While it wil take years for our schools to recover what they have lost, I applaud the Governor for putting California on the path toward restoring the financial health of our schools,” Torlakson said. “I also applaud the Governor’s focus on students with greater needs….We  need to also make sure that all students benefit from California’s recovery.” He added, “Califiornia must move forward now so that all children—no matter where they come from or where they live—receive a world-class education and graduate ready to contribute to the future of our state.”