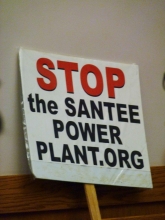 July 4, 2012, 2012 (San Diego’s East County)--Ten points clarify why an initiation to amend the community plan and rezone from open space to industrial should be denied by the San Diego Planning Commission at the July 19th hearing.  Rezoning, if approved, would allow construction of the Quail Brush gas power plant near Mission Trails Regional Park.

The 10 points were discussed by a local citizen in a letter to the San Diego Planning Commission, CEC, and local elected officials.  The full letter which follows, answers and clarifies these serious points.

Preface.  I was in the audience at the Planning Commission June 28, 2012 meeting.  I would like to comment on several matters.  I am also writing in anticipation of the July 19, 2012 Planning Commission meeting when a vote will be completed as to denying implementation of an amendment to zone land dedicated to Open Space conservation to heavy industrial use to accommodate a power plant.

It is unclear at this time whether only the two Commissioners who were not present at the June 28 meeting will vote, or whether all Commissioners may vote anew.

Introduction.  The issue of denying the applicant initiation of an amendment to install a large power plant on environmentally conserved East Elliott land is unusual for several reasons.  The City requires a vote to “initiate” such an amendment.  The responsibility for determining whether to initiate an amendment is assigned to the Planning Commission rather than the City Council.  The California Energy Commission is the lead agency for siting a large power plant.  The Energy Commission conducts its own review.  The reason the matter is before the City Planning Commission is because the Energy Commission refers to the City responsibility for determining whether the project is in conformity to the City’s laws, ordinances and regulations.  The Energy Commission may override the City’s decision if it finds that the project meets the criteria for establishing public necessity or convenience.

For the City, this is an issue about location.  A power plant belongs in an area zoned for heavy industrial use.  The land where the applicant wishes to install its power plant is dedicated to open space conservation, zoned for very low residential use (RS1-8), is close to schools, hospitals and residences, and adjoins Mission Trails Regional Park.  The land is in the Multiple Species Conservation Program (MSCP).  The Mission Trails Design District Ordinance controls development in the region close to the park so that development is in conformance to park landscaping. The applicant seeks to amend this area to heavy industrial use.  That means changing the East Elliott Community Plan, the Sensitive Land Regulations, zoning, the Mission Trails Design Group Ordinance, and the MSCP.

The problem is exacerbated because the applicant, who had wide latitude where to site its proposed plant, sought out this environmentally conserved area.  It now is insisting on the City changing the land’s designation to accommodate the power plant.

1) Three Initiation Criteria.  The initiation criteria for an amendment are: a) the amendment request appears to be consistent with the goals and policies of the General Plan and community plan and any community plan specific amendment criteria; b) the proposed amendment provides additional public benefit to the community as compared to the existing land use designation, density/intensity range, plan policy or site design; and c) public facilities appear to be available to serve the proposed increase in density/intensity, or their provision will be addressed as a component of the amendment process.

All three initiation criteria must be met.  It is evident that the first criterion, consistency with the goals and policies of the General plan and community plan, is the over-riding consideration.

It may be useful to see how Development Services handled a previous request, one much less controversial than the applicant’s present proposal.  In the former case, an owner submitted a plan in which the owner sought to develop two contiguous East Elliott parcels totaling 17.86 acres for 19 single-family homes.  The number of homes is based on the applicable zoning (RS1-8).  The Planning Department responded (Planning Department, 9/7/2006, Cecilia G. Williams, AICP, Program Manager, PTS #81594), “The majority of the East Elliott Community is intended for conservation as Open Space.”  The Planning Department continues, “Due to the Open Space land use designation of the site…further subdivision of the property would not be consistent with the community plan designation.”  And, “The request to subdivide the subject site based on the underlying RS-1-8 zone with 19 single-family dwelling units is contrary to the policies in the community plan regarding open space preservation.”  The Planning Department points out that the East Elliott Community Plan contains Open Space Management Guidelines, “for the continued preservation and enhancement of the natural Open Space areas within East Elliott.“  The Community Plan states:

“Natural Open Space areas should remain undeveloped with disturbance limited to trails and passive recreational uses such as walking, hiking and nature study that are consistent with preservation of natural resources.”

Compare that to the applicant’s proposal to put a power plant that is 20% longer than a football field, three stories high, housing 11-gas-fueled generators, each with a 100-foot tall smokestack in East Elliott.

3) The proposed amendment conflicts with the General Plan.  The City Council adopted the new General Plan in 2008.  The plan was written because the City had expanded outward into land in its natural state.  Little land (4% in 2006) was left for critical housing.  Protecting remaining open space and recreational areas is a General plan priority.  I discussed this in my letter to the Planning Commission dated June 19, 2012.  Putting a power plant in an area designated for open space conservation is clearly incompatible with the General Plan.  On that basis alone, the Planning Commission is acting appropriately to deny initiation of the applicant’s amendment as required by the first criterion wherein the amendment is not compatible with the goals and policies of the General Plan and community plan.

7) The private owners and city-owned land.  A Commissioner was concerned about the impact of a power plant on city-owned and private land.  At this time there are about 783 acres of privately held land in East Elliott consisting of 49 parcels.  An estimated 700 plus acres are City owned.  Most city-owned property is west of the landfill.  Parcels under other ownerships are part of the open space component.  Pardee’s Castlerock Project is to be located on the border of Santee in a narrow 117-acre strip.  This area was excluded from the MSCP when the East Elliott Community Plan was revised in 1997.

A power plant in this area not only despoils the land on which it is placed, but the property surrounding it.  It is a major alteration to the character of the land.  It is deleterious to the privately owned property in the vicinity.  Each of the 11 Wartsila 20V34SG reciprocating generators is 42 feet long and 15 feet high.  The plant will produce noticeable noise during operations.  The plant will likely impair future use and value of surrounding property.  The low vibrations from the 11 reciprocating engines will impact habitat.

8) The elephant in the room.  The elephant in the room is the group of private East Elliott property owners.  They or their predecessors, usually family, purchased East Elliott property when former Camp Elliott was declared surplus.  The property was sold as residential property ready for development.  Notwithstanding the MSCP’s purpose to allow private owners economically feasible development while providing for Open Space conservation, the City has restricted the private owners’ development rights based on the land’s Open Space designation and because the land is habitat for sensitive species.  It is inconsistent with the City’s priorities, and unethical, for the City to then turn around and approve siting a large power plant on the conserved property.

9) Can environmental damage caused by siting a large power plant in Open Space conserved land be mitigated?  The concept of “mitigation” is that if a development project encroaches on environmentally sensitive land, one may be able to “mitigate” the damage by giving other property of equivalent or greater environmental value to the City.  That concept is most applicable when a City is growing into a much larger land area, and there is such “mitigation” land to give to the City.  However, as we know, the City has grown outward into its natural land areas.  This has used up the major portion of open space or environmental sensitive land that might otherwise be used for mitigation.  This is just as it has used up almost all the land available for housing.  That is the fundamental reason for the City’s causing the writing of a new General Plan.  The General Plan shifts the paradigm from one of mitigation to one of conservation.  The principle purpose is to hold on to the remaining open space and habitat area, and protect it from encroachment of development.  That is not what is occurring here, where the applicant’s object is to site the power plant on conserved Open Space and habitat property.

In this case the applicant proposes to purchase East Elliott property for “mitigation” of their power plant.  But the East Elliott land is already designated by regulation to Open Space regardless of ownership.  In effect, the City gets nothing.

Having said that, the applicant, under the circumstances that apply to power plants and amendments, still gets three bites at the apple.  Upon receiving a denial from the Planning Commission, the applicant may appeal to the City Council.  It is the City Council that caused the creation of a new General Plan based on the City’s outward expansion into natural areas with the resulting diminishment of both open space and property suitable for housing.  If the City Council wishes to overturn the fundamental values expressed in the General Plan to allow a large power plant on land conserved for Open Space and habitat protection, it is the City Council’s place to do so.  Moreover, it is apt that the City Council be the decision maker at this stage.  That is because the City Council will not see the project again till after the California Energy Commission, the lead agency, has made its determination.  Finally, even if the City Council denies the applicant’s wish to initiate an amendment to change conserved land to heavy industrial use, the California Energy Commission exercises independent judgment.  It may over ride the City if it determines a legitimate reason for doing so.  Nothing could be fairer to the applicant.

Your comments are welcome and encouraged. For more information, visit SaveMissionTrails.org. This website contains additional photos and information of the location discussed above:  http://www.facebook.com/PreserveWildSantee/photos

Where were you all when they put the 500 KV power link across the "pristine" BLM lands in the East County? How's it feel now that it's in your back yards?