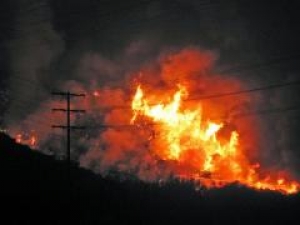 June 10, 2011 (Lakeside)--As we watch the fires burning our neighbors in Arizona, we are again reminded why relying on imported power transmitted over hundreds of miles of vulnerable transmission lines, is a dangerous gamble for San Diego.

In Arizona, people are currently experiencing brown-outs as the firestorms have cut off major population centers from energy sources and disrupted transmission lines.  Burned transmission lines could shut down power as far as away as New Mexico and Texas.

Here in San Diego, we have witnessed similar conditions. During both the Cedar and Harris Fires, our power “lifeline” was disrupted, as the Southwest Powerlink was required to be shut down during both of these fires. Now, San Diego ratepayers are getting ready to increase this risk with the soon-to-be-built Sunrise Powerlink, a 2 billion dollar rate-payer financed transmission line (aka “extension cord”) which would run from Imperial County to San Diego traversing some of San Diego’s most fire prone wilderness.

The project’s Environmental Impact Report has characterized this region as “one of the most fire prone landscapes in the world,” and cautioned that Sunrise Powerlink will “significantly increase the likelihood of catastrophic fires.” Not only can we reasonably expect fires along this route to render us as vulnerable as Arizona, our energy security will also be vulnerable from a single mylar balloon, or from a terrorist act anywhere along the 122 mile transmission line. This, and various other scenarios, could each easily render San Diego powerless.

If transmission lines were a necessary “evil”, then this would be a moot point. However, the fact is that transmission lines are not needed, and are only necessary when a region can not generate its energy locally and is required to import its energy from a far distance; in this case, from 122 miles away. San Diego already has the Southwest Powerlink which imports energy generated from coal and LNG in Mexico.

SDG&E has stated that the Sunrise Powerlink will be used for renewable energy. The fact is that sunny San Diego does not need to rely on Imperial County to produce and import its renewable energy needs, as there are ample opportunities within San Diego to generate our energy locally, and develop a strong, green and local sustainable energy future locally without additional transmission lines. Just ask Qualcomm, UCSD, and Ronald-McDonald House, and thousands of other homes and businesses who have recently joined the energy revolution by generating their renewable energy here in San Diego.

So why would SDG&E push for more transmission lines, when this is clearly a less reliable, more vulnerable and expensive option? To answer that question, one needs to follow the money and the lobbyists. Consider that SDG&E’s revenues are based on the cost of providing energy, plus a guaranteed profit. In addition, SDG&E does not get any financial benefit when its consumers produce their own energy. Therefore, it is understandable why SDG&E wants this project to be built, and why they have paid multi-millions on marketing and lobbyists to influence public perceptions.

As we watch the tragedy unfold in Arizona, it is a reminder for San Diegans to think about the future we are building in our own region. Will we choose a fragile future built upon a centralized system, with only two or three major transmission lines feeding the energy for our entire region, while traversing the most fire prone areas of our county? Or will we choose a more secure and prosperous “distributed energy” future, which does not increase our risk of firestorms, and which supports the investment of in-basin renewable energy right here in San Diego?

While the fate of the Sunrise Powerlink is currently in the hands of the federal courts, the long-term future of energy transmission in our region will ultimately be influenced by the strength of the combined actions (or lack thereof) of San Diegans. Without citizen action, the utility lobbyists will determine our future, and it will be based on what will make the most profit for SDG&E and Sempra. You can learn more about San Diego’s opportunity for a clean, green and reliable distributed energy future in the “Smart Energy 2020” plan available at http://www.sdsmartenergy.org/smart.shtml.

Laura Cyphert is the co-founder of the East County Community Action Coalition (ECCAC). You can learn more about ECCAC at www.EastCountyAction.org.