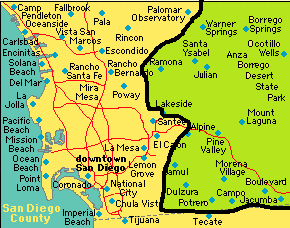 February 14, 2014 (San Diego’s East County) – In more ways than I can count, San Diego Supervisors have shown disdain for the people of East County, the environment, and the character of our communities.  Supervisor Dianne Jacob is a notable exception, fighting to protect us from fire hazards and destructive energy projects. But time and time again, she’s outvoted by four Supervisors who don’t live in East County, and don’t care if they destroy what makes our region special.

So why should we continue to give them our tax dollars?

Let me list just a few of the ways that the County has abdicated its responsibilities to East County residents:

Fire safety:   A media investigation revealed a fire station in Boulevard was closed for two months during fire season.  Stations in Jacumba and Campo also had many dark days. Now the County is forcing a takeover of rural fire districts, getting rid of loyal volunteers who know our back roads and care about our communities. They want to put Cal Fire in charge, but a court just fined Cal Fire $32 million for "corrupt and tainted" actions. Is that the ethical standard we want for the folks in charge of protecting our lives?  Now if we refuse to dissolve our fire districts, the County will take away funding. Yet the County refuses to put firefighting services as a guarantee in the County charter—even though they got out of the firefighting business once before, returning only after a devastating firestorm.  Why should we blindly trust our lives to a county that’s failed to live up to its promises in the past?

“Greed” energy:  The board majority rammed through a county wind ordinance to allow industrial-scale energy projects in rural, scenic and wilderness areas.  They refused to oppose Sunrise Powerlink, which the Environmental Impact Report described as a severe fire hazard that couldn’t be mitigated.  They gutted Boulevard’s community plan over residents’ objections. They approved a substation that used three times more water than predicted—and now they’re pushing for more industrial energy projects that hydrology experts warn could drain our groundwater and turn our wetlands into deserts. That’s not “green” energy – that’s “greed” energy!

Public safety:  Why are response times for the Sheriff several times longer in our rural towns than in coastal communities?   It can take an hour or more to get a deputy out—even for reports of violent assaults in progress.  Don’t our lives matter?  This is absolutely unacceptable.

Rural poverty:  Poverty rates are high among our rural residents, but the county has done nothing to create jobs, focusing on already-wealthy areas like Poway and Sorrento Mesa to attract biotech companies instead. Resident groups seeking to revitalize our backcountry to promote eco-tourism, wine tasting, the arts and more hit roadblocks in San Diego, which only cares about attracting tourists to the beach areas.  East County has beautiful mountains, lakes and deserts, quaint rural towns, historic scenic highways, quaint bed and breakfast inns, farms, parks, river trails, Native American reservations and historic Old West attractions that deserve support, too, to  give our backcountry a vital economy.,

Access to public services:  Why does rural East County have no hospital? No medical clinic? No county veterans’ services?  No access to social services?  No animal shelter?  No higher education?  No attention arts or culture? Virtually non-existent public transportation?  We pay taxes, too, and we deserve equal access to services that other communities in our county take for granted.

Enough is enough.  It’s time for rural East County and inland region residents to band together and form a new County centered around our beautiful environment, agricultural and eco-tourism, the arts,  and preserving our historical heritage--plus protecting our communities against fire hazards, predatory energy companies, and ecological disasters foisted upon us by short-sighted urban and coastal supervisors.

Outsiders who don’t live in our rural areas shouldn’t be allowed to make decisions that destroy our communities, our water supplies, our forests, wilderness and wetlands!

We can run a slate of new supervisors to represent us -- people who have stood up to these abuses and proven their integrity. I invite local tribes to join us too, if they're tired of county officials paving over their ancestors and disrespecting tribal sovereignty.  We can make preserving sacred sites part of our charter, along with preserving the natural beauty, groundwater resources, wildlife and rural character that all of us should cherish.

Let’s take back our property tax dollars from self-centered coastal NIMBYs --and take back our rights to control our own destiny!

Claudia Millerbragg There is now County Veterans Services once a month. I am with this writer - lets secede!

Chris Schuyler We have to stop electing those that don't live here.

Claudia Millerbragg There are a few of us ready to secede. How do we begin?

Fred Jones, Connie Beck, Lisa-Jeannine Smith Rutherford and 5 others like this. Kat Wolfdancer It's been comin' for years andis past due. >^,,^<