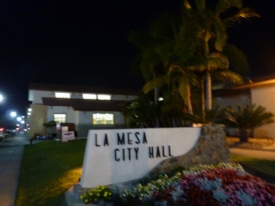 Editor’s note:  La Mesa Today reports that Guy McWhirter has admitted to funding the negative mailers targeting his opponent, Mary England, and funneling the money through the non-local “Public Safety Advocates” PAC. England in fact has the endorsement of La Mesa’s police, fire and public employees’ associations. The same PAC sent a negative mailer on an Alpine candidate.  The mailer was similar in style to a second mailer sent anonymously, which listed endorsements for other candidates by 115 Alpine residents, some of whom have denied making the endorsements.

October 24, 2014 (La Mesa)--For the first time that I can remember, defamatory mailers or “hit pieces” have been delivered in La Mesa from big money and outside interests.  Mary England who has the only endorsement by the La Mesa Police Officers’ Association is being attacked by a “PAC”, or Political Action Committee calling itself “Public Safety Advocates” out of Encinitas.  The PAC is specifically targeting just one candidate, the only woman and the one with the most experience running in a field of five for the two open seats on the La Mesa City Council.  Why now and for this position?  Who is really behind this?

If we follow the money, we don’t have to look very far. Public records (Form 496) shows a contribution from Guy McWhirter, who donated $5,000 on 10/13/2014.  The “Public Safety Advocates” who have thus far put out three hit pieces on Mary have received their money not only from Guy McWhirter, but from many builders and developers, and a local Diamond dealer, CK Diamonds who is owned by Charles “Chuck” Kaderabek from El Cajon.

Guy McWhirter, a retired Bishop of the Mormon Church in his own words said he “recently completed his church responsibilities and turned management of his Farmer's Insurance Agency over to his daughter so he has the time and inclination to run for elected office”, is now running for La Mesa City Council.

As I understand it, the church teaches that men and woman are equal and women are to be respected.  So, why would McWhirter give $5,000 to an outside special interest group to mail “hit pieces”, that are inaccurate with half-truths, attacking the only woman in the race?  He must be more like a professional politician then he’s letting on.  La Mesa deserves better.

The editor's note states "The same PAC sent a hit piece on an Alpine candidate found to contain false information". If the editor wishes to maintain any journalistic credibility she should specifically address how she confirmed the political mailer referencing Alpine school board candidate Lou Russo was "found to contain false information". Unlike Ms. England in La Mesa, Mr. Russo has not directly denied the information disseminated about him, in short that he was unable to secure a permanent position as a teacher at 2 high schools in the region. Mr. Russo is a friend of East County Magazine and a regular contributor. If the editor chooses to state that the information in the political mailer was false, she better be able to back up that claim. If not, it just looks like she is helping provide cover for a friend, totally inappropriate from a journalistic standpoint, and in my opinion, much more inappropriate than any negative campaigning carried out by a PAC. The flyer stated Mr. Russo was "non-reelected" (a fancy term for fired) at Central Union High School after 2 years as a probationary teacher. Ms. Raftery, please state how you confirmed that is false information.
to clarify that there were two separate mailers. One, sent anonymously but in the same style as the PAC's mailer, listed endorsers for rival candidates; some of those people have said they did not make the endorsements, though others were legit. The other mailer raised the issues about Russo's past employment as a teacher. We have emailed Russo to ask if those allegations are true or not; meanwhile we received a note stating he has gone hunting for a few days and won't be checking emails. Also of note on public safety issues; Russo has taken a controversial stance calling for arming parents or community members to protect schools, a stance that the board majority and superintendent have disagreed with. It is unfortunate that most candidates in the Alpine race did not return the questionnaire that we sent, so that makes it difficult to provide information to our readers about the other candidates. Only Russo and Mr. Dickie returned the questionnaire. Other than attacking Russo what do the rest of the candidates stand for? Would be nice if they'd let us and the voters know. The Alpine Community Network contacted me to ask if I had any info on the candidates in the AUSD race, since most had not returned her questionnaire either.
Ms. Tolin - Thank you (and ECM) for bringing this information into the public domain. A clear service to the electorate. Negative campaigning for this election started many months ago, then got a serious boost with the "Dear Neighbor" attack piece. But the mailers that are arriving in homes across the city right now are beyond the pale. Still worse, the money trail has many people fearful and fuming. The questions you raise are essential to our understanding of what's going on. Please keep digging and reporting.
If Mary England wants transparency then she should be telling La Mesa all of the truth. Like the fact that she lived in La Mesa while she occupied a seat on the Lemon Grove city council. It's a matter of record. She stated during her quest for a seat on the planning commission that she had been a resident of La Mesa for five years. Most of that time sitting in a Lemon Grove city council seat. She and her cronies will try to spin this and say she had property in Lemon Grove or that the city attorney told her it was okay. Well it's not okay and it wasn't right. Where will she live if elected to the La Mesa council? El Cajon maybe?
Kudos