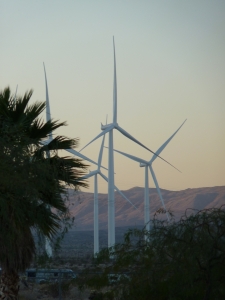 September 19, 2016 (Washington D.C.) -- The Bureau of Land Management (BLM) is expected to release its Wind and Solar Leasing Rule in the next few weeks.  The rule would create a system for competitive solar and wind energy development on federal lands. It would also establish megawatt (MW) capacity fees for wind and solar energy projects in order to capture a fair market value (FMV) and a fair return for taxpayers.  View the BLM proposal here.


The federal government should not just give away public assets.

Revenues from royalties collected from natural resource development on public lands and waters represent an important source of non-tax income for the federal government. Ensuring that taxpayers are receiving a fair return through the fair assessment and accurate collection of royalties has been a guiding principle for TCS for more than 20 years.

Although commercial wind and solar development will not extract a resource from federal lands in the same sense that removing a mineral like coal does, it will use resources such as advantageous location, terrain, and prime wind and solar resources for commercial gain. The federal land to be used for wind and solar power generation provides critical resource inputs that have additional value far in excess of basic rental fees charged for occupying the land. The BLM should account for the value of these resources.

Other resource development programs use a system of competitive leasing and royalties to capture fair market value.

The Federal Land Policy and Management Act requires that the government receive FMV for the use of the public resources. Typically, the BLM collects the majority of revenues by charging a royalty per unit of commodity produced. This is also typically the case for energy development on private lands. Oil and gas leases are subject to royalty fees of 12.5 percent for onshore leases and 18.75 percent for offshore. All federal coal leases pay an 8 percent royalty payment for underground mines and 12.5 percent for above ground. Congress created systems that allow the BLM to designate and offer leases in competitive auctions to help ensure FMV. Other renewable energy systems, such as geothermal and offshore wind and solar, also use a competitive leasing framework.

The proposed rule would replicate other energy development programs.

Legislation has not been enacted to establish either a wind or solar energy development program. Absent the authority to charge a royalty, the BLM has charged rental rates that take into account the added value of advantageous renewable resources as a means to ensure a fair return for taxpayers. Though inferior to a royalty, the proposed rule would improve this process by creating a MW capacity fee using a project’s potential electric generation and average wholesale prices of electricity. Linking the fee to wholesale electricity will help ensure a fair return when prices are high and provide lessees with relief during down years.

Controlling the pace and location of development is the BLM’s responsibility as manager of these federal assets.

The BLM is responsible for managing the location and pace of energy development on public lands. It has proposed advantageous conditions for companies that develop wind or solar resources in areas already vetted and prioritized by the agency for development, which should help streamline the approval process. It would also create a nomination and competitive bidding process instead of an application process.

The federal coal program demonstrates the problems that occur when industry is given too much control of the process.

In January, Interior Secretary Jewell announced a moratorium on new federal coal leases in order to conduct a review of the federal coal program. This was primarily because the leasing process used by the BLM known as Lease by Application gives coal companies too much control of the process. This has resulted in little competition for leases, and studies have indicated that the resulting losses for taxpayers are substantial. The BLM’s wind and solar proposal would help avoid this problem.

The proposed rule should be finalized because it is the best option for ensuring fair return to taxpayers.

Renewable energy generation on public lands will continue to grow. The BLM needs to establish a stable and predictable program now. The BLM’s proposal does a good job replicating the provisions of other energy development programs that have been effective at ensuring a fair return to taxpayers.