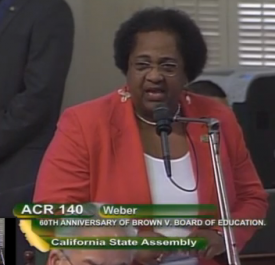 June 7, 2014 (San Diego)--On May 17th 1954, the United States Supreme Court unanimously overturned the separate but equal doctrine of the 1896 Plessy v. Ferguson decision after arguments presented by Thurgood Marshall - then a lawyer for the NAACP Legal Defense Fund. The Court concluded that, in the field of public education, the doctrine of separate but equal has no place and that separate educational facilities are inherently unequal. The activism generated to enforce the Brown decision was a catalyst for the Civil Rights Movement and led to further state and federal anti-discrimination legislation.

My colleagues and I commemorated the 60th Anniversary of Brown v. Board of Education this week with a resolution as a reminder of the significance and the achievements of this Civil Rights milestone.  (View video: https://www.youtube.com/watch?v=Qq9YhN6qX70)  My hope is that we don’t let this anniversary deceive us into thinking we’ve fulfilled the hopes of Brown or that work of eliminating inequities in education is behind us.

While we can be proud that it has been six decades since the Supreme Court desegregated our nation’s schools, it is necessary to acknowledge that we are nowhere near where we hoped to be in terms of educational outcomes.  Minority student dropout rates are still painfully high, the academic achievement gap is widening, a disproportionate number of these children are still destined for a burgeoning expensive prison system, and segregation in our public education is back.

This is not a failure of the Brown decision or its goals. Studies conducted two decades into desegregation demonstrated that schools integrating students of different races and socio-economic backgrounds had worked to improve academic outcomes for those students. The problems we are seeing now are largely due to efforts to rollback policies that effected desegregation, as well as to the effects of crushing poverty on minority children.

Claiming desegregation under Brown was a temporary remedy, the U.S. Supreme Court's decision in 1991 in Dowell v. Oklahoma City authorized a return to neighborhood schools even if the change in policy would lead to re-segregation. More recently, the Court ruled against a Seattle School District considering racial diversity in determining admissions to popular schools in its districts. A study released by UCLA Thursday found that Black and Latino students are increasingly segregated by race and poverty in California schools.

The NAACP Legal Defense Fund reports that “as a result of these developments and other factors, public school children are more racially isolated now than at any point in the past four decades.”

At the same time, we cannot ignore economic factors that inhibit the ability of minority children to learn. According to the latest census data, one in four black or Latino children are living in poverty. We have known for years that the malnutrition, inadequate healthcare, and a stressful and chaotic home life experienced by poor children have significant detrimental effects on their brain development, vocabulary capacity and long-term academic outcomes. Yet there is a persistent effort in our society to stigmatize and underfund social programs that mitigate the effects of poverty on children, including vital nutritional programs, with claims that they perpetuate dependence on government assistance or they cannot be sustained when budgets are tight. This is, of course, short-term thinking.  Without these interventions, children living in poverty will continue to trail far behind their peers in academic achievement and economic productivity, increasing the likelihood that they will require more costly remedial or special education, become dependent on social services as adults, or cost taxpayers over $47,000 annually as an inmate at one of our prisons.

To Thurgood Marshall’s exhortation to dissent from indifference, apathy, fear and mistrust, I would add to that we have an obligation to dissent from excuses, especially excuses for failing to address the lingering effects of the injustices of our past and for not making sound investments in our future. The 60th Anniversary of Brown is not just about commemoration, but should also be about commitment. We need to take this milestone as a reminder to both recommit to integration and inclusion of minorities in our educational institutions and to refocus our efforts on programs that support families and children in their efforts to excel in school and to escape poverty.