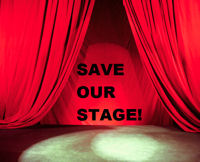 By Art Lane
April 14, 2012 (El Cajon)--So just how independent will the San Diego Union-Tribune (now reincarnated as the “San Diego U-T”) be when it comes to covering news stories involving local real estate project developers? This whole question may be borne out in El Cajon in coming months, when the city council considers a proposal by Lakeside developer Neal Arthur to raze the historically management-and-fiscally troubled East County Performing Arts Center (ECPAC) and in its place build a four story, 107 room “luxury” (business class) hotel managed by Courtyard by Marriott.
Citizens have started a website to save the theater at  www.SaveECPAC.org

In January, the San Diego U-T was purchased by San Diego real estate developer and entrepreneur Douglas Manchester for a reported $110 million from a Beverly Hills-based venture capital firm which bought the newspaper from its original owner, Copley Press, some three years ago.

When Manchester was about to take over ownership of the U-T from Platinum Equity,  the U-T was roundly criticized by its biggest rival, the San Diego Reader, for printing editorials backing Manchester’s downtown San Diego Navy redevelopment project.  The U-T editorialized that the coastal commission rejection of the Manchester plan “does not have to mean the death or even the overly long delay, of the project, the thousands of jobs it would create and the hundreds of millions of dollars in economic stimulus it would spark for  San Diego over the next decade.”
At stake now is whether Manchester will be able to resist squelching any negative news coverage in the U-T of the controversial East County proposal (in the spirit of “thou shalt not criticize thy fellow real estate developer”), which was approved for consideration in a 4-0 city council vote three weeks ago.  That came to fruition on the heels of the recent California State Supreme Court decision to dismember city and county redevelopment agencies and cede all state-owned property and land parcels to public auction in late December.
In El Cajon, the developer of the proposed Marriott project, Neal Arthur, is not a widely known commodity. This is directly contrary to El Cajon’s worst kept secret -- the widely alleged ties between El Cajon’s mayor, Mark Lewis, and East County real estate developers Hamann Construction Co. and Darryl Priest, and their ties to ECPAC’s previous management concern, the Christian Community Theater (under the moniker, “Artbeat Management.”)
But there are already great publicly and privately expressed doubts whether this proposal to raze ECPAC could even realistically ever see daylight due to a number of reasons, notwithstanding, that the city would be faced with a minimum $2 million dollar bill to tear down the 1,142 seat theater and issues relating to financing in a severely depressed economy.  And then there’s the big question whether El Cajon could truly support a luxury hotel in the first place. That is going to be Neal Arthur’s and the City of El Cajon’s biggest obstacle to deal with.
While the El Cajon City Council has gone out of its way to legalistically stifle public scrutiny of this proposal, it remains to be seen whether Mayor Lewis and his merry councilmen have the intestinal fortitude to face widespread-and-deep community anger that it would lose a recognized acoustically “perfect” performing arts center that Mayor Lewis promised two years ago to reopen after needed renovations.
As well, it goes without saying that Council, Mayor and El Cajon law enforcement officials will have to assuredly answer community concerns that a new “luxury” hotel will attract the byproduct of the hotels: prostitution – something the hotel industry doesn’t like to openly acknowledge or discuss. At least with the new El Cajon Police Department Building and the El Cajon Superior Court Jail across the street from the proposed hotel and the proximity of the Las Colinas County Detention facility, the city would perhaps realize some savings when they will be called to transport these inevitable uninvited guests and clients of the hotel after their arrest.
If there is any glimmer of hope that the U-T will allow objective reporting in this emerging news story, it is its recent editorial criticizing the project with the headline, “A Deal El Cajon Should Pass Up.” It suggests that the city should reject Neal Arthur’s proposal and wait for the right opportunity and circumstance on reviving – and not razing ECPAC.
Manchester, a hotel developer himself, hinted at an ulterior motive however—suggesting that another former redevelopment parcel in El Cajon  may be a better site for a hotel—and should be auctioned to enable a national hotel developer to swoop in and start building. How convenient.
As publisher and chairman of the U-T, Douglas Manchester is clearly in the very enviable position of following famous American essayist and journalist A.J. Liebling’s assertion that “the power of the press belongs to those who own one.” But it is the public interest and responsibility of the independent media (such as East County Magazine) to follow the ancient adage of “who will guard the guards?”
The opinions in this editorial reflect the views of the author and do not necessarily reflect the views of East County Magazine. To submit an editorial for consideration, contact editor@eastcountymagazine.org.