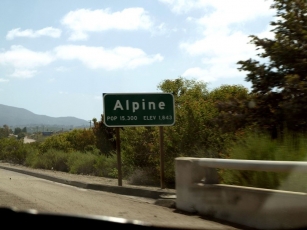 June 24, 2017 (Alpine) -- I am an Alpine resident who attended the Alpine Community Planning Group meetings in September 2016 and again in May 2017. What follows are some of my thoughts about both meetings.

The September meeting primarily focused on the expiration of the Forestry Conservation Initiative and the resulting re-zoning of parcels in the Japatul Valley area, which will allow for development and increased density.

The focus of the May meeting was primarily about the Alpine Fire Department and its application to the San Diego Local Agency Formation Commission (LAFCO) to annex land into its boundary.

These two issues are related, though at first look, they may not appear to be. The issues are complex. Because of the complexity of these and other issues affecting those of us that live in Alpine, I’d like to see a greater effort be made by those on both the boards of the ACPG and the AFD to more effectively communicate the facts surrounding these issues in laymen’s terms so that the general population may gain a clear understanding of both sides.

The members representing us seem to forget that many of us are not accustomed to attending these kinds of meetings and in addition are beleaguered with the affairs of daily living. This is one reason we elect them to represent us.

We expect their conduct to exemplify fairness, for them to be courteous, and that they, at all times should exhibit self-control. What I am seeing worries me. One long-standing member whose conduct I observed, is frankly lacking in these areas. He wrote in an online magazine that a representative of the Forestry during the September meeting was “tarred and feathered”. This leads readers to believe that all present at that meeting were of the same opinion. Indeed, many were as shocked as me to read this. I feel that his choice of words was poor indeed and speaks volumes about his character, or his lack of character.

In the May meeting, it was his unruly behavior that concerned me. He exhibited blatant lack of self-control when he jumped out of his chair to challenge another member that he disagrees with and to threaten to prematurely close the meeting down. I don’t like how the other members allow him to rant in this bullying manner. His behavior was incited when the member he directed his rage at simply stated that the AFD chief was lying and that he had written a letter explaining how.

Meanwhile, another topic on the agenda was put on the back burner, which was a subcommittee report from the Alpine Design Review Board regarding plans to develop the East end of Alpine. Unfortunately, The ACPG has, I hear, a reputation for this kind of lack of sophistication.

The majority of ACPG members are men. The presence of more women, as well as the addition of younger citizens would help balance the chemistry of the board. Consider coming to some meetings and offer your input. We need to hear from everyone.