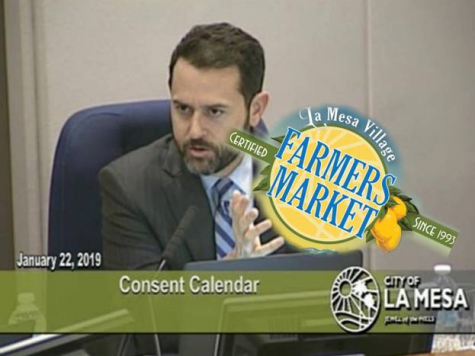 Who does Colin Parent really serve?

July 23, 2019 (La Mesa) -- I am a bit taken back by this recent post on a thread on NextDoor regarding the Farmer’s Market before tonight’s vote on which of four proposals to adopt.  The scare mongers are out there in full force and one of your colleagues is spear heading it.  If you have not seen this link and web page, I encourage all of you to look at it.  https://www.colinparent.org/farmersmarket

Is he able to use this material?  I believe he should be told to "cease and desist" from using the City of La Mesa's logo for the Farmer's Market and ALL associated marketing, slogan and other wording that the City has used for decades.

Shouldn't a Councilmember remain neutral until all the facts are known and the agendized item is discussed and he hears all views?

Fact:  The Farmers Market is not leaving La Mesa.  he best option in my opinion after its initial roll out with all the fraud involved and major businesses being misrepresented or not represented at all--is to move it out of the Village where there will be no competition with our long time brick and mortar businesses and restaurants.  It makes no sense to shut down part of the city on a weekly basis during prime lunch, happy hour and dinner times especially on a Friday.  Who has been profiting from this?  The La Mesa Village Merchants and Brian Beevers.

The City of La Mesa (government) already has egg on its face from the start of this with the fraud and lack of oversight and more recently with the information coming out about the LMVA not having the non-profit status that it bragged about since its formation in 2016.  Does Mr. Beevers have a business license to do business in the City?  Is he paying local taxes?

If I think about all the tax dollars that have gone to the Village and both of the Merchants associations over the past few years with that pattern continuing, it begs the question…does the City Council recognize that we have a city beyond 3-4 blocks on La Mesa Blvd?

Who does Mr. Parent represent in this?  Did he do outreach to see what our neighbors to the north felt about perhaps having a Farmer’s Market closer to them with parking at Grossmont Center?  Does he care?  It appears that he is going overboard on his support for this and has an unhealthy relationship with the Merchants.  Could he have a possible conflict of interest?  Does it seem right that his mind is made up and he is lobbying for one side outside of the Council Meeting?  Perhaps he should recuse himself at the meeting on this issue as he is clearly biased.

What about Grossmont Center?  Aren’t they one of our largest shareholders contributing a very good percentage of our tax revenue?  Don’t people live in other areas of La Mesa deserve to have a Farmers Market closer to them?  If our neighbors to the north wanted to come to the Village would there be parking for them there?  Doubtful.

And let’s address the most exciting factor in this possibility—the charitable aspect.  Grossmont plans to donate 100% of its proceeds from the farmer’s market to benefit La Mesa charities, if its proposal is approved.  How can you argue against that?  This is a great entity, and has proven to be a long time giving organization.  When was the last time any of their organization came to City Council with their hands out?

I urge you to listen to the brick and mortar restaurant owners and business owners who have weighed in on this and wish it to be moved.  I urge you to remember that the Council voted on this which is why a new RFP went out and why you now have a good option to move the Market out of the Village and do more for the City—the entire city that you represent. 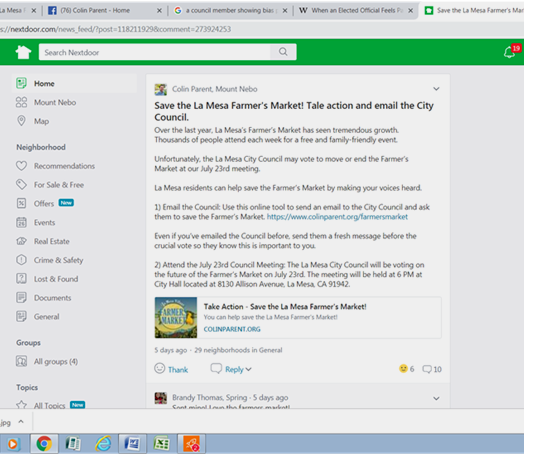 Please see below Mr. Parent’s public post on Nextdoor during a long discussion on this issue.  If you go on his "take action" link, it appears to me that he is putting his finger on the scale by providing a quick and easy way to onslaught you--the rest of the Council with letters of support with a “canned” letter, just push go!  It specifically advocates to keep the market downtown.

Text of advocacy letter on Parent's site to keep the market downtown:

Did he or any of you do any outreach to other parts of our city in this very long and contentious process?  Is this how you all work together to solve issues in the City?  “Save the La Mesa Farmer’s Market”?  Isn’t that what Grossmont Center is trying to do?

That is misrepresentation on his part.