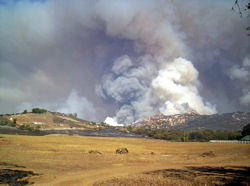 San Diego County will unnecessarily lose hundreds of homes to wildfires this fall: An open letter to Cities' Councilmen, Supervisors, local State legislators, and activist groups
By John Scanlon
August 13, 2012 (San Diego)-- The Problem – We are past due for a repeat of the major fires in 2003 and 2007. There is an abundance of fuel in the back country after five years w/o a major fire. We are now in a very active fire season. July was the hottest it has been in the lower 48 since 1895. We continue to be grossly underfunded and under-prepared at all levels to handle another catastrophic fire season.
Plus we are increasing fire starters through development in the backcountry, including hazardous wind turbines, while we are decreasing the number of firefighters.
All levels of government are under financial constraints
The City of San Diego lost hundreds of homes in both 2003 and 2007. Yet, we now have fewer firefighters per population than we had in those years. The city has a mere 800 firefighters for a 2010 population of 1,307,402 or 0.61 firefighters per thousand – a full 500 firefighters below the standard of 1.0 per thousand. And, the city has far more than normal fire risk with finger canyons and Santa Ana wildfires.  We have lost 125 firefighters in just the last three years. This is the lowest level of coverage of the nation’s ten largest cities.  (1, 2)  In the early 2000s the average for the ten largest cities was 1.3 firefighters/ 1,000 population.
Calfire has a similar deficit of personnel and now has fire engines manned by 3 man crews rather than 4 man crews. Cal fire in the County has lost 72 of its full time firefighters in just the last year.
The Solutions
Train 500 wildland-only, volunteer firefighters for San Diego County.
Lease two Canadair CL 415 air tanker Super Scoopers for the fall fires.
Certify Marine Corps pilots for night flying in Cal fire controlled areas.
Share funding between all the cities in the County, the County, and the State.
Inmate firefighters are used primarily to establish and maintain fire lines during wildfires.  They are only trained to fight wildland fires.  After just two weeks of full time training, they are put to work.  If convicts can be effective firefighters, so can regular citizens.  Inmates are full time while regular citizens would not be, but inmates are no longer available when they get out of prison while regular citizens can be available at times of peak need for years to come.  Further, the Governor’s Prisons/Jails realignment is projected to reduce prisoners available to be firefighters.  They will have to be replaced.
San Diego County spent 3 million in the fall of 2008 for the use of two Super Scoopers.  LA County has leased these aircraft for 14+ years.
The political problem -
Our political leaders at all levels have thus far refused to take any actions.
We have less than three months till the Santa Ana fires begin.  There is no time left.  We must begin training volunteers immediately.
The political solution
Lobby all your political leaders at all levels to immediately implement the above recommendations.
Lobby the real power in the County - our local plutocrats such as Papa Doug Manchester, Malin Burnham, John Moores, Dean Spanos, etc.
This should be followed quickly by occupying San Diego City and County admin buildings and demanding they either immediately start training us or arrest us so we can join inmate firefighters.
After we are arrested, we will have to occupy portions of the county jail and demand they send us to Cal fire inmate training.  (3)
Any additional action ideas would be much appreciated.
Call or email me if you’re willing to be a wildland-only, volunteer firefighter.  We need hundreds.
Sincerely,
John F Scanlon
13336 Caminito Ciera #38
San Diego CA 92129-6028
jfscanlon@aol.com
HP      858 538 1434       Cell    858 354 3336
1 http://www.nbcsandiego.com/news/local/SD-Firefighters-Forced-Into-Overtime-161513405.html
2 http://quickfacts.census.gov/qfd/states/06/0666000.html
3 Both the San Diego City council and the County Board of Supervisors are not set to have public meetings again till Tuesday 9/11.  We’re left with office visits and occupations of other strategic areas outside of council/board chambers.
The City of San Diego has always had funds available for redevelopment but not for basic public needs like minimal fire protection.  The City Council recently approved 5.9 million to fund Civic San Diego (CCDC) and approved Plaza de Panama knowing the City will have to back up any deficiencies in projected funding.  It is more than interesting that those who benefit from redevelopment, developers and the building industry, also benefit from rebuilding the hundreds of homes we lose in each of these major wildfires.
The City’s loss of hundreds of homes, for the third time in less than a decade, will be due to criminal negligence.
The opinions in this editorial reflect the views of its author and do not necessarily reflect the views of East County Magazine.  To submit an editorial for consideration, contact editor@eastcountymagazine.org.