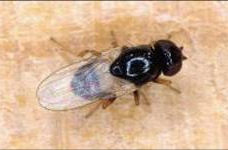 An Open Letter To the Honorable Supervisors on the Proposed Ordinance Amending San Diego county’s Regulatory Ordinances Relating to Vector Control
By Danielle Cook
February 13, 2012 (Jacumba) --I am a resident of Jacumba, a member of JAG (Jacumba Against Gnats), Secretary of the Jacumba-Boulevard Revitalization Alliance and one of the four (total) community representatives that participated on the EGIWG committee that produced the proposed new ordinance draft.
I ask that you vote against the ordinance as presented unless the following key sections are amended:
1)       Section 64.408 Eye Gnat Abatement Appeals Board formation
We believe the communities should have the RIGHT to select the pool of candidates from which the supervisors select the community representatives to serve on the Appeals board. Why this is critical: It is far too easy to “stack the deck” either on purpose or by accident. There will always be members of a community that because of personal or business relations with the farmer think that anything the farmer does is OK. We have seen this in Escondido and in Jacumba. The deck was stacked in the EGIWG committee from the beginning as there were five active committee members who vowed to protect the farmers “no matter what” VS four community members.
2)       Same Section item marked a)
We are asking that the advisor [one of the five individuals appointed to the Board] not be associated with the Department of Environmental health, standard farming, organic farms or organic gardening in any way including blogging or writing about organic produce or farming or providing services to organic farms.  Why this change is critical: For the same reason as above. The Supervisor selected “advisor” that was part of our Committee [an Organic Blogger] was so biased for the farmers that in the first meeting, her attitude was “bugs are part of rural living, just accept that”. She continued to be hostile towards community members throughout the process.
3)       Section 64.409 Eye gnat abatement Appeals Board Powers and 64.407 Appeals and Petitions
The Eye Gnat Abatement Board should have the final say on farmer appeals, but only those dealing with cultural abatement practices. We would like a clear chain of responsibility granted to one County official, the Director of Department of Environmental Health [currently Jack Miller] in the extreme cases where voluntary and mandatory abatement practices have not worked and the community is still suffering and therefore shutting down the farm may be the viable solution. We feel that Jack should consult the Appeals Board and weigh their recommendation with other evidence but have the authority to shut the farm down if necessary. Why this is critical: “Stacking the deck” remains a real worry for the communities, especially in cases where a lopsided quorum is achieved.
It is disappointing that nearly every significant suggestion made by the two Jacumba Community representatives was shot down:
• While we agreed that more research was important ,we suggested that it occur in areas away from communities (IE set up testing/research sites in isolated farm fields -we were told, Nope, too expensive and not practical, (instead we will be lab rats for at least two more years and it apparently is OK for Jacumba residents to continue to be hammered by ongoing economic losses)
• We suggested using the Mir Mulla designed eye netting method to determine nuisance abatement since collar traps could not be used to determine this-We were told, Nope, can’t use human subjects (I guess it is ok though that Jacumba residents are still being used as lab rats)
• We suggested the use of plastic to place on the fields during fallow periods to heat the ground and kill the eye gnat larvae-even though the farmers and the entomologist Jacumba consulted agreed this would work, we were told Nope, too expensive for the poor farmers and besides the heat would also kill important nutrients in the soil (surely nutrients can be added back?)
• We asked for a time limit where the experiments would stop and the communities would get relief and were told Nope, can’t do that (yet the farmers were given timelines through the appeals process to try different abatement procedures)
Candidly, the Ordinance as presented is a TERRIBLE ordinance for Jacumba given our already 8 years of agony and the two years of county and farm experimentation with different cultural abatement methods [which the farmer chose in some cases to ignore]. However, I do see this ordinance workable [with the recommended amendments] for communities where NEW organic farmers are moving in, as the farmers would automatically [one would hope] begin voluntary plan implementation so the ambient gnat populations that were already there wouldn't have the opportunity to explode to unimaginable levels as they have in Jacumba
Where Jacumba is concerned, this one-sided ordinance does not provide any deadline where Jacumba can expect relief and no guarantees we ever get relief. In fact, the draft ordinance contains so many safeguards for the farmers and potential loopholes (because of the generous and potentially biased appeals process), that it is pretty much guaranteed that the residents of Jacumba will continue to have to keep our children indoors during prime play period, continue to have to put down cherished family pets due to gnat- induced eye infections, continue to suffer major economic, and other quality of life damages indefinitely.  The eye gnat populations have grown so out of control that it is doubtful they can be brought back down to ambient levels. Anything less is unacceptable as the eye gnats will ruin our ability to attract and retain tourism-our only viable source of economic growth.
In the America I grew up in, ONE tenant farmer’s rights would NEVER trump those of a community of 560 that was there first and struggling to survive. In the America I grew up in, the political “powers that be” would do the right thing even when faced with political pressure and not let this injustice happen.

How sad that those days are gone.