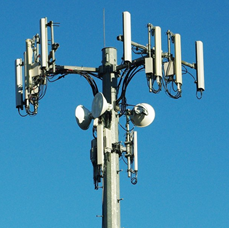 March 1, 2019 (San Diego’s East County) -- This week the County Board of Supervisors (BOS) unanimously voted to allow hazardous high-radiation-emitting 5G "small cells", the same as are on cell towers, to be placed on street poles very close to homes in the unincorporated area of the County. This approval occurred despite receiving at least a thousand pages of information about the dangers to health, wildlife, insects, trees, plant life, andproperty values for the past month, and meeting with a number of concerned constituents. Property values may plummet as much as 30% near these "small cells", according to a local realtor, because people don't want to live near cell tower radiation. She was one of 24 speakers. Two Verizon employees spoke in favor of the ordinance, which is very industry-friendly. In September, the FCC issued orders which became effective on Jan. 14th, 2019, forcing local governments to have less control over this process. Meanwhile, 5G industry leaders admitted in a Senate hearing that no safety testing had been conducted.

"Less control" doesn't mean "no control". The BOS could have crafted a stricter ordinance like many other counties and cities are doing,  After this vote, which shocked the many speakers, Chairperson Jacob said the Board of Supervisors may consider improving the ordinance in the next 180 days, and may also look at suing the FCC, as some speakers had urged.But will they, really?

I recommend you contact all five County Supervisors to let them know you want representation and to improve this wireless ordinance - tell them to stand up to the FCC and sue the agency - that these 5G "small cells" should not ruin our neighborhoods and make them unlivable, or harm our real estate investments.  That you don't want small cell antennas anywhere near your homes. Ask them to tighten up this new wireless ordinance to protect the community and its property values and fight back against a federal government that has begun ordering us around locally. Tell them we have theright to protect life, health, and property.

Why no 5G safety testing

See the BOS meeting of Feb. 27th: hear the speakers, watch the vote.

COUNTY BOARD OF SUPERVISORS

Not sure who your Supervisor is?  Check this map: www.sdcounty.ca.gov/general/bos.html

It is coming anyway. But note that there will remain places where 5G will not pencil out, and 4G or NoG (Satellite only or "no internet") will remain the only options. These are rural or wilderness areas, either without enough population density for 5G to cost out, or small towns so remote that are already not served by cellular. 5G is going to come everywhere else, urban and even "horse" suburbs. (Ya'll call it "rural", but horse suburbs are not rural;-)
The claims of health and environmental concerns are at best controversial. There is still some science to be done, but overall there is very little reason to consider this technology a risk. But I am not here to argue that, exactly. The truth remains that false impressions and fear can and do impact property values, even if the underlying reasons for any decrease are either irrational, or even legitimately aesthetic. The reverse side of this is that some people may pay more for a house near a cell because they value top tier connectivity and streaming speed, but I would not count on it. Homeowners need a way to protect their investments, and it would not be too much to ask for the telecoms to share some income with properties that are effected, just like the current private hosts of cell towers earn lease income.