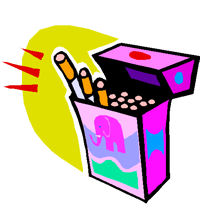 By Scott Alevy
President & CEO, East County Chamber of Commerce
May 17, 2012 (San Diego’s East County)--One of the most important services the San Diego East County Chamber of Commerce offers to the entire business community is our ongoing advocacy, including ballot initiatives and legislative issues. We are proud to serve as the voice of the business community in East County, and take that responsibility seriously.
East County Chamber opposes Prop 29, which would increase taxes on cigarettes
At their May meeting and following recommendations from the Chamber’s Government Affairs Committee, the Chamber Board of Directors took official positions on measures that are included on the June Primary Election ballot.
One is on the statewide ballot (Prop 29) and the other is only on the ballots within the city of El Cajon (Measure D). We urge our members and other voters concerned about the business environment to consider these positions:
California State Ballot Proposition 29 – OPPOSE

The Board of Directors voted to oppose an initiative statute described as imposing an additional tax on cigarettes for cancer research. That initiative appears on the June 2012 ballot as Proposition 29: Imposes Additional Tax on Cigarettes for Cancer Research. Initiative Statute.
Proposition 29 imposes an additional $1 per pack tax on cigarettes and an equivalent tax increase on other tobacco products to fund research for cancer and tobacco-related diseases. It is estimated to raise nearly $1 billion in new taxes, but nothing in Proposition 29 requires the funding to be spent in California or even in the United States.
Although cancer research is important, the Chamber feels it was inappropriate to create a new program when the state is slashing existing essential programs, such as education and courts. In addition, the State Legislative Analyst’s Office concluded that the revenue stream to fund these new programs would be declining and the Board was concerned that it would once again put existing programs at risk to keep the new programs.
We urge your vote against Proposition 29.
The Chamber has chosen not to take a position on State Proposition 28: Limits on Legislators’ Terms in Office. Initiative Constitutional Amendment.
City of El Cajon – Measure D - SUPPORT
The Chamber’s Board of Directors also took a position of support for Proposition D in El Cajon. This measure would change the City’s form of government from a general law city to a CHARTER CITY.
The Chamber feels that becoming a Charter City would allow El Cajon to have stronger control over local governance and affairs. The measure is intended to provide a framework for matters that are not of a statewide concern, including self-governance in contracting for goods and services. The City Council, in placing the measure on the ballot, recognized that being a Charter City would likely save taxpayers money by reducing the cost of public projects and create greater governmental efficiencies.
Some opponents of Measure D are generally those who feel that the City should require Project Labor Agreements (PLA) for all construction projects. These are generally those from organized labor and the construction trades.
Others are concerned about the few failures of the form of government in other cities, though there are only one or two examples of problems in the 120 of California’s 482 cities have adopted charters. The language of the City measure specifically addressed this concern.
Your Chamber of Commerce will continue to advocate for a better business environment. We urge you to vote, and to consider the Chamber’s positions.