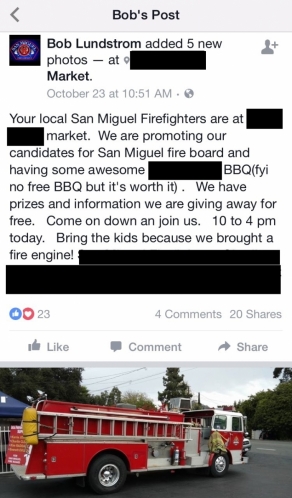 November 5, 2016 (San Diego’s East County) -- In reference to your article regarding Santee firefighters' use of a fire engine for political action, it should be known that the same is being done in San Miguel.  Those who oppose the CAL FIRE Cooperative Agreement are using an Engine that the District sold to them (Former Local 1434 / San Miguel Firefighters Foundations) for $1 with the clause that it would not be used for political action, well it clearly is.  Not only are they using it for political action (Displaying at local businesses) they are also sharing the images on Social Media and storing the fire engine at a fire station.  See video.  They are also driving the engine around the District with trucks in front and behind supporting the opposition.  From day one they have done everything to sabotage the CAL FIRE Agreement, this is just another example.

Disposition of Returned Apparatus from the Mt. Laguna Fire Department: Local 1434 Union President Steve Butcher addressed the Board to share how the local would utilize the Crown fire apparatus should the Board agree to allow Local 1434 to purchase the apparatus. Upon discussion, a motion by Director Clark, second by Director Rickards, and unanimous vote, recommendation to

2) APPARATUS NOT TO BE USED FOR POLITICAL CAMPAIGN ACTIVITY OR CONTRACT NEGOTIATIONS;

3) prepare an agreement with regard to transfer of title from the District to Local 1434, title transfer fees, insurance, and maintenance and storage within the district,

4) Local 1434 agrees to return the apparatus back to the District if decided they no longer want the apparatus; and,

5) allow Chief Kinard to negotiate the transfer of the apparatus and a written agreement with Local 1434, was approved.

Opinions in this editorial do not necessarily reflect the views of East County Magazine.  To submit an editorial for consideration, please contact editor@eastcountymagazine.org.

Is this group, the Former Local 1434 / San Miguel Firefighters Foundation a tax exempted entity? And if so, wouldn't using the Foundation engine parked in a Fire District station for political purposes void their tax-exempt status?