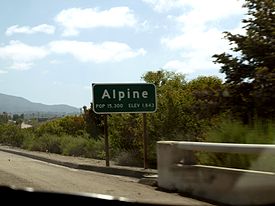 December 11, 2018 (Alpine) -- Running for a seat on the Alpine Community Planning Group taught me a lot. It was like a crash course on local politics. I’ve been attending the group for over three years and I can tell you this: if you have views that are nota carbon copy of the group majority, don’t expect to be warmly welcomed. When I was campaigning, lies sprouted up like weeds from long term group members, and their friends, on Alpine’s social media sites. Some made little sense. One individual said that I had called Cal Trans and asked them to remove a church banner. This had nothing to do with the election. It was coming from a person grasping at straws, looking to put me in a bad light.

One Alpine woman, who works for Channel 10 News, posted a three year old video (edited) that she made of me and my puppy, walking on Christmas Eve. She was angry that my puppy was off leash in an area where he should have been leashed. I was startled by her abrasiveness. She came at me like a bully, demanding that I tell her my name and where I was from. I was ready to get home after a nice, long walk. I was alone, and, frankly, afraid. Not knowing how to respond to her aggressive demands, I gave her a false name, hoping she would go on her way. Before she left, she gave me this sarcastic greeting, “Merry ****ing Christmas! In all fairness, if one intends to publicizemoments like this one, they should either notify the public that ithas been edited or publish it in its entirety, which she did neither.She claimed that I gave her permission to do this. While I did tell her, “Go ahead”, it was without understanding her intent. As it turns out, she is friends with planning group members who had their own reasons to discredit me. When she found out I was running for the ACPG, she used the video to make me look bad, saying I was irresponsible, and a liar. Really? Many people were allowing their dogs off leash in that area, and it just emphasized to me how much Alpine needed a dog park. And who has not given a fake name to throw a bully off their trail? None of the good things that I have accomplished were taken into account, and indeed, not many are known by that group. When they want what they want, this is how they go about getting it.

Ironically, it was this meeting along with my discovery of Back Country Land Trust authorizing the use of Roundup at Wrights Field, on the very kind of plants that dogs like to eat, Wild Oats, that brought me to the ACPG in the first place, which was to advocate for a dog park in Alpine. I found out that the planning group had not been able to get a community park here, even after trying for twenty plus years. My efforts then went towards advocating for a community park, with the intent of having a dog park located within the park once it was established. No one who attacked my character actually knows me. All of this nonsense was just to try to alter the outcome of the election. If someone like me, who is minimal competition, is gone after in such a fashion, imagine what lengths would be gone to in order to affect the chances of one who is significantly greater competition. The only thing I can say is: shame on these manipulatorss, whose intent is to destroy the names of good people, attempting to discredit them. I hope that the people of Alpine will ‘consider the source’. As I’ve said, I have learned a lot.