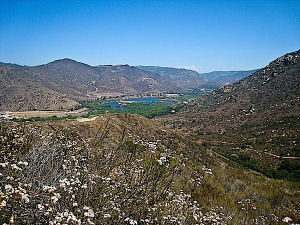 February 9, 2013 (San Diego)--An editorial, written in defense of the proposed Gregory Landfill, recently complained that, “…the Pala decided to claim the entire mountain is a sacred site.” I sometimes wonder how much the people who do, or say, things like that know of their own ancestry? Without resorting to a genealogist, can they tell us where their paternal great, great grandfather lived? How about their maternal great, great, grandmother?

I once interviewed an elderly Indian woman about a 900-year-old axe that had recently been dug up. She was a stocky woman, the chief of her local band, and peered out at me through dark rimmed glasses. Her words, “my people” reached back through the centuries to claim ownership of the artifact.

Listening to her, I suddenly realized that I had no “people.” I am a Canadian, but that word seemed more a geographic accident that a statement of being. My sense of personal history is limited to my family tree. The Indian woman and I were microcosmic reflections of how differently our cultures view the past. I knew something about the personalities that shaped history, but almost nothing of how my family fit into that picture. Her approach was more integrated. The Indian woman’s family history was so intertwined with that of her people that she thought of them as the same. She is not alone.

Unfortunately for our bigoted reporter, North America was occupied before we Europeans arrived. Every tribe has its own mythology and places that are sacred to them. Looking out from my front window, across the waters from where I now live, there is a village whose story intertwined with that of one of that people’s great mythic heroes. Mankind was supposedly created about ten miles south of here, at the mouth of a river. Though I don’t know many local legends, I can point to a couple of sacred places that are not far from my home.

I have read that Gregory Mountain - where they want to put the landfill - was one of the resting places of a mythical figure called Takwic, and for that reason the mountain was sometimes called Takwic Puki, or Takwic’s House. (It was more commonly called, “Chokla.”) The Luiseno people have been making pilgrimages to Chokla for generations. They also consider the river that flows beside it sacred, and believe the Gregory Canyon landfill represents an enormous potential threat of desecration to this vital source of life-giving power. I have no reason to doubt this story. It is similar to the local traditions found in many locations across North America.

We Europeans have long chosen to ignore this. Not too long ago Raymond Robinson, of “Idle No More” fame, said something to the effect that when the White Men came, his ancestors offered to share the land with them. The White Men responded by taking it.

Of course, our ancestors would have thought of it differently. The Native Americans were “savages”, who did not know what to do with the land, and our ancestors were “civilized.” Do we want to perpetuate that colonial mentality?

If not, it would seem we need to recognize that the people who lived here before us have a connection to the land. Maybe we should start letting them have a voice in the things that matter to them. Maybe, working together, we can find a way to live together.