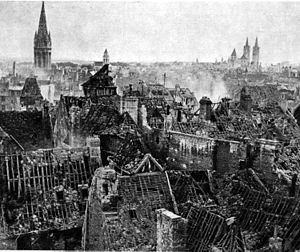 By Daniel J. Smiechowski, San Diego
Photo:  Invasion and bombing of Normandy, France, which the author’s mother survived during World War II (CC by SA image)
April 3, 2020 (San Diego) -- I understand the gravity of our situation in maintaining personal health, finances and a host of other considerations during this unprecedented time of national and global catastrophe. I have not changed one single behavior except for perhaps understanding more acutely the folly of mankind.
My entire life has been devoted to personal philosophical reflection, social psychology and participating in athletics, the past forty years traveling the earth in search of triathlon. A couple of weeks ago, I was at my second home in France just exiting the country before all hell broke loose. I ran in an event and placed first in my age group. It was a happy time being among friends and family, respected by the French nation.
Oddly and incredibly, studying French literature and philosophy as a young man at the University has helped me cope. My time at the Sorbonne has taught me in multiple ways in understanding the folly of humanity. “We all die as fools” Voltaire--Americans are a peculiar people. We profess to die for our country yet during rosy times most of us simply ignore human suffering. When times get tough, everyone is a patriot, everyone is a hero. I understand. We all seek solace and compassion in view of fear and uncertainty. My only fear is in not being able to comfort the children. The children need us now more than ever.
Perhaps San Diego will learn a lesson in humility, but I doubt it. When this calamity is over, citizens will revert back to their barbaric driving, being inconsiderate and so on. As for now however, the drive thru at Krispy Crème doughnuts stretches for miles. We cling to comfort like a mother and baby. This is humanity. All of my education, all of my life experience has prepared me for this moment. A nation on its knees. In a twisted sense, this is repulsive to me.
I became an avowed nudist for optimal health in San Diego’s high desert only to be despised and ridiculed as some sort of weirdo. The last I heard zip code 91934 located in my endurance training compound had zero cases of the Coronavirus. Maybe I am a weirdo.
My Mother told me stories of her being afflicted with tuberculosis during the invasion of Normandy during WWII. She lived on those shores and her modest home was bombed relentlessly into submission. I think of her every day. I become overwhelmed by a feeling of contempt for those seeking doughnuts at Krispy Crème. Maybe I’ve lost compassion. I don’t know.
As recently as seventy-five years ago the Nuremberg Trials sought judgement on the slaughter and murder of six-million Jews. There remains one constant. Humanity will learn nothing. So, I continue my quest of athletics and health coupled with a firm grounding in reality. This crisis shall pass as others precedent.
The opinions in this editorial reflect the views of the author and do not necessarily reflect the views of East County Magazine. To submit an editorial for consideration, contact editor@eastcountymagazine.org