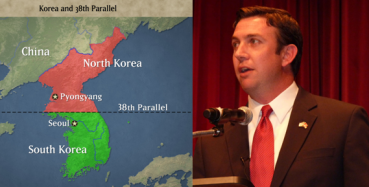 October 8, 2017 (San Diego) -- As an Army veteran and constituent of Rep. Duncan Hunter (CA-50), I was shocked by Hunter’s recent calls for preemptive war with North Korea. I spent twenty-seven years in uniformed service to my country, and I expect a combat veteran like him to be far more cautious about committing us to actions that we all know would result in the death of hundreds of thousands, if not millions, of innocent civilians. It would also put tens of thousands of Americans in uniform in mortal danger.

Rep. Hunter’s flip statements suggest the U.S. could hide our 35,000 military personnel in South Korea underground during a first strike. Then, he believes we could successfully invade the hermit nation using conventional warfare. But any military man should know that the minute we start moving our troops south, away from the Demilitarized Zone (DMZ), the North Koreans would launch a horrific attack.

Half of South Korea’s population lives within 35 miles of the border.  The Pentagon believes North Korea’s 8,000-piece conventional artillery, arrayed along the DMZ, is capable of an immediate, devastating barrage on South Korea’s capital, Seoul. Even without using nuclear weapons, that would kill 20,000 civilians per day. Our ally Japan, with 100 million people, is also in striking range of North Korean missiles.

That Hunter would advocate such a sacrifice for others is shameful. It does not represent American values. The United States claims a higher moral ground and we pride ourselves on our international leadership. We protect our allies as we would protect ourselves. It’s the Golden Rule of our foreign policy.

North Korea obviously poses a terrible threat that requires everything in our toolbox, from diplomacy to agriculture to technology and yes, military action. But military action must be used only as the last possible resort, when every other method has been exhausted. Yet Hunter made his latest reckless comments, mocking diplomacy as “talking, talking, talking”, as our Secretary of State was in Beijing persuading the Chinese to increase sanctions. War is too lethal and too lasting in its effects to be considered lightly. Hunter’s rush to war should cause every constituent to question his judgment and to hold him accountable for his provocative words.

“The supreme art of war is to subdue the enemy without fighting.”

Those words, from The Art Of War, were written over two thousand years ago by the Chinese military strategist and philosopher Sun Tzu. His work is considered so brilliant that it is used to this day in the advanced training schools of the US armed forces. Maybe Duncan Hunter should read it and stop embarrassing the 50th District with his extreme, and extremely dangerous, talk.