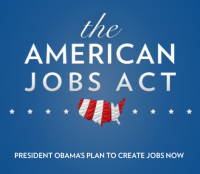 September 16, 2011 (Spring Valley) -- President Obama has addressed the public's concern about the lack of jobs by a proposal that addresses public needs, such as infrastructure repair, as well as jobs for the unemployed. Several elements of his proposal had bipartisan origins.

Unfortunately, Congressman Hunter (R-52CD) often puts his party ahead of both public and individual needs.

Congressman Hunter should live up to the image he tried to create by sponsoring the recent East County Career Center's Job Fair and vote to support the President's proposal, the American Jobs Act.

Putting the Republican Party ahead of the best interests for the people in East County is nothing new for Mr Hunter. He barely even campaigned last election. The people running against him had to go on a hunger strike in order to get Mr Hunter to agree to a debate. He makes a big deal out of the Job Fairs he attends, but I guess his true colors are starting to show. I am truly grateful that some one will critizise him and pin him down for answers. It seems he assumes that anything he does represents East County If people heard his opinions and saw how he votes, there would be some changes made next election. I asked a neighbor what she thought of him, and she said "He must be doing well since he has been our Representative for decades." I'm finding out quite a few people think he is his Dad, also Duncan Hunter, also Representative of 52nd district.