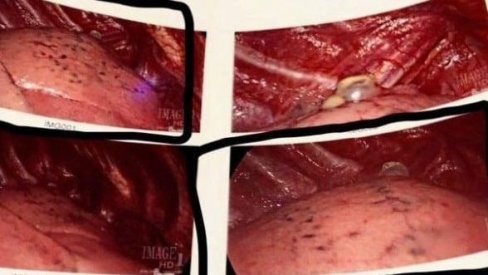 “We applaud the 26 California jurisdictions that have taken these steps and encourage El Cajon to join them.” – Dana Stevens

Photo: Chance Ammirata shared these photos on Twitter of his collapsed lung and lung spots, which doctors attributed to vaping. The 18-year-old Florida student underwent emergency surgery and was told he can no longer do cross country running or scuba diving.

September 20, 2019 (San Diego’s East County) -- Hundreds of people have been hospitalized across the country, including 12 here in San Diego, by a respiratory illness linked to vaping that has claimed eight lives – sadly this number seems to increase daily. If emergency rooms were facing this rush of illness from any other source, it would have been pulled from the shelves within days. The Food and Drug Administration (FDA), the government agency that regulates tobacco products, describes an outbreak as when two or more people get the same illness from the same food or drink contaminant. Food producers recall their product from the marketplace when the products are mislabeled or causes illness. Vaping devices, the flavored liquid used in those devices, and the liquid form of THC are not regulated by the FDA.

Over the past 30 years, considerable progress has been made in reducing cigarette smoking among our nation’s youth.1 With a shrinking tobacco profits and youth tobacco use continuing to decline, what does the industry do?  Take a page from the advertising playbook on Mad Men, change the name and redesign the packaging. They stop calling the nicotine delivery system cigarettes and call it vape. Make it look like a thumb drive and disguise the harsh tobacco flavor with strawberry, bubble gum or cotton candy.  Now you have an entirely new market for your prepackaged addiction.

Vape aerosol is not harmless.2 Most e-cigarettes, including 100% of JUUL products, contain high levels of nicotine. Nicotine exposure during adolescence harms the developing brain, and impacts learning, memory, and attention;1,2 it can also increase risk for future addiction to other drugs.1,2 In addition to nicotine, the aerosol that users inhale and exhale from e-cigarettes can potentially expose the smoker and bystanders to other harmful substances, including heavy metals, volatile organic compounds, and ultrafine particles that can be inhaled deeply into the lungs;2

Vapes come in kid-friendly flavors, making e-cigarettes more appealing to young people,5 some of the chemicals used to make certain flavors may also have health risks.2 E-cigarettes can also be used to deliver other drugs, including marijuana.2 In 2016, one-third of U.S. middle and high school students who used e-cigarettes used marijuana in them.6 This has become so prevalent that teens refer to them as wax pens, referring to the high THC marijuana extracts known as wax, butter and shatter.

With hundreds sickened and several dead, why are these products still allowed? For the same reason we still have tobacco products – Big Tobacco and its new cousin Big Marijuana that fund powerful and influential lobbyists. They have ruled the halls of Congress for years, but now their impact is felt in our own communities.  Policymakers should protect our youth from those industries that profit from peddling addiction. We need to eliminate the sale of flavored tobacco and marijuana products, vaping components, accessories and any marketing to kids.

On October 8, El Cajon will consider a proposal by Councilman Gary Kendrick to ban vaping and sales of flavored vape products.  We applaud the 26 California jurisdictions that have taken these steps and encourage El Cajon to join them.

1. Office of the Surgeon General. The Health Consequences of Smoking-50 Years of Progress: A Report of the Surgeon General. Atlanta, GA: US Department of Health and Human Services, Centers for Disease Control and Prevention (US), National Center for Chronic Disease Prevention and Health Promotion, Office on Smoking and Health; 2014. https://www.surgeongeneral.gov/library/reports/50-years-of-progress/full-report.pdf.