A Rebuttal to Jim Kelly's guest editorial in ECM 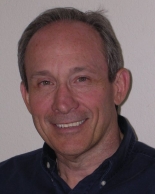 I'll say it is--there is only one politically motivated attack agent. It is Jim Kelly who for years has been officially the recruiter for the out of touch extremist right local party that is in charge of ruining the conservative name with its radical right agenda. There is zero validity to Jim Kelly's rebuttal.

2) There is no long term declining enrollment; a short-term downward trend ends in 2013/14 (see chart by GUHSD hired professional demographer, Vince O'Hara) and see his student recovery report... and Alpine is not in decline... based on real elementary enrollments, the HS12 would be much larger than the planned 800 student phase 1 HS12, a waiting list would be made on day one of its' opening... see the feeder middle school actual enrollment chart,

3) The CBOC was stacked with Jim Kelly political ladder climbing appointees, who were sympathetic to his desire to teach those Alpinians who has the power in East County, leave Jim Kelly alone, or else, JK is even willing to step on the toes, and bite the hand who feeds his district many extra funds, the Kumeyaay Nation of Native Americans.

4) Steele Canyon Charter HS has a waiting list for new students... the HS12 would take students to strengthen the GUHSD, but Steele Canyon would not suffer, they are at over-capacity. SCCHS was designed to handle 1,800 students, it enrolls 2,400. Do those students a favor, give the impact relief, and open the HS12.

5) No political Tricks Here, except by Jim Kelly, Misinformed is he, or simply lying.

I do hope more than the Governing Board is listening! 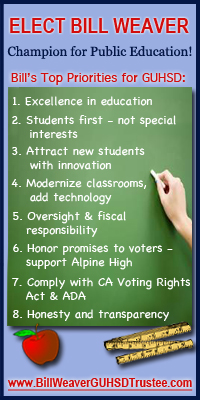 PS. Jim Kelly was the lone dissenting vote against Prop U going on the ballot. He said he is a conservative against new taxes. Odd, that three days prior to the 4-1 vote, there was a 5-0 unanimous vote for this new tax (Prop U), the only difference was the enrollment trigger Jim Kelly alluded to, he proposed the language of the bond be amended to include a trigger (originally it has no trigger), he proposed 23,745, a number 500 students greater than existing district wide enrollment at the time.

He was for that tax, but when Ms. Schreiber got it down to 23,245, or equal to the current 2008 enrollments, well let's just say "he was for it before he was against it", Jim Kelly's vote is motivated by political expediency!

PS2: 4 GUHSD Board Members are not against a 12th HS; Jim Kelly and his two majority members seem to follow Kelly's lead, however Dick Hoy had always been aware of the value of this project, being voted down on numerous occasions 3-2. Ultimately Mr. Hoy tossed in the towel, voting with the majority, so as to try to be collegial, and PTA, Principals, etc being against it, the status quo is comfortable... Winners though must measure the gain vs. risk factor.This project pencils out as worthy of the minimal (if any) risks vs. the monumental upside gains. Per Vince O'Hara, the upside is statistically predictable, and student’s gains are considerable, as is the ADA funding upswings commensurate with student gains.

This GUHSD Board and Administration is a BIG DISAPPOINTMENT!

Last night, At the regular monthly second Thursday Bd. meeting, Nov 8th, they voted on 18 recommendations proposed by Superintendent Ralf Swenson in regard to the Bond projects. The 18th Recommendation was to pull plans on the 12th HS, and not continue to fund the project until further action is taken by the Board. Little discussion took place.

I spoke, explaining that the Granite Hills HS is now going to have to be modernized for 2,800 students, this makes no good sense, 600 of those students should not be provided accommodations at GHHS, save that money, to put towards the 12th HS... The GUHSD Bd didn't listen, my comments fell on deaf Administration and Gov. Bd. ears.

I also reminded them that the Bd. Makeup is likely to soon change, that a vote on this should wait. They ignored me, this Bd is unethical, unprofessional, and even laughable as they disregard good protocol, and best Governing Board practices.

Today is it... the last day... VOTE your wishes, remember, collegiality is in order fo those that must be part of a governance TEAM...

But I would like to address Mr. Jim Kelly who recently published, Re:, "about building a new Alpine high school, which you [Schreiber] clearly intend to pursue, means you [Schreiber] do not trust the voters to agree with your position. Hence, even if you [Schreiber] win re-election you will have no mandate from the voters on that issue."

THERE IS A VOTER APPROVED MANDATE ALREADY, Mr. Kelly!