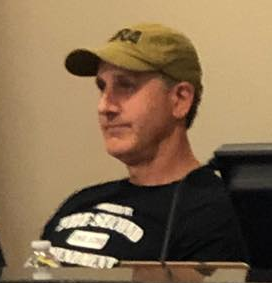 “Mr. Miller is nothing but a bully, mocking people who want to oppose his political views.” –Kilian Colin, who has launched a Recall Jim Miller page on Facebook.

May 5, 2018 (El Cajon) -- I was just starting my breakfast before heading to school. I like to check news and social media while eating breakfast, and I noticed an article about a counseling intern at Hillsdale Middle School who had her contract revoked because she spoke to the press about the fact that the students who participated in the March 14 school walk out for Parkland were given detention. I was upset to learn that the intern’s First Amendment right to freedom of speech was violated. I decided to attend the next board meeting to speak to the board about this unfair action against the intern, who lost her job and was banned from applying to any future position in the district.

I headed to that board meeting on April 10. The room was completely full, so that I had to stand up by the wall waiting for my turn to make a public comment regarding this issue. The San Diego for Gun Violence Prevention (SD4GVP) volunteers were seated next to each other in two rows, wearing their shirts with logos that called for an end to gun violence. What was very interesting to me was Jim Miller, the Vice President of the School board, was wearing a shirt with a logo “Powered by The Second Amendment.”

I didn’t know anything about Mr. Miller before, but I was concerned to see someone on the school board in this district violating the dress code in a board meeting. I was also concerned to see Miller bringing partisan politics to school board meeting, while he got elected on a non-partisan slate. A man commenting in favor of the school board praised Mr. Miller for wearing the shirt, and in the same breath, praised the board for “not politicizing Parkland.” He asked Mr. Miller to stand up, and Mr. Miller responded by taking off his blazer to make sure that people saw the message on his shirt.

When another commenter informed Mr. Miller that his shirt violated the dress code, Mr. Miller responded by putting on an NRA hat. I realized at this point that Mr. Miller is nothing but a bully, mocking people who want to oppose his political views. When it was my turn to make my public comment, I shared my experience growing up in Iraq, as an interfaith LGBTQ child, who was bullied and had no teacher to stand up for me because they were afraid of being retaliated against by the government. I told the board members that the counseling intern is every one of us. I looked at Mr. Miller and reminded him the First Amendment was written before the Second Amendment.

After a time, Mr. Miller switched his hat to one with the logo of the San Diego County Gun Owners Association. The next speaker was Michael Schwartz, the Executive Director of the San Diego County Gun Owners Association. He also praised the board for not politicizing Parkland. When he spoke and turned around and told the SD4GVP members that they were the reason that police officers were needed at this meeting, even though everyone was seated and no one was being disruptive. I was completely shocked to see that he was allowed by the board to speak in such an intimidating tone against other members of the community, especially since the board had stated at the beginning of the public comment session that speakers are not to address the audience. The board said nothing and allowed the vitriol to continue.

When I went home, I googled Mr. Miller’s name. He was removed from the Superior Court for ethics violations. I was completely shocked to see a disgraced ex-judge is on the board of the school district where my future children will be attending. Why would I trust someone to run my kids’ school when he is a disgraced politician?

I decided to attend and speak at the next board meeting on April 24. Other members of the community attended and most of them spoke publicly. I asked the board members to do their duty as public officials and said they must censure Mr. Miller actions. Some of the board members were being sarcastic with their body language when we were speaking. I told them eye rolling was not just inappropriate but also rude and offensive against their constituents.

There are way too many republicans who have bought into the rhetoric B.S. that has been spewed forth among them, believing that the democrats want to take away all guns! Preposterous! It's not about taking away guns, it is about certain types of gun control. I suggest researching the FACTS before spewing angry hate.

Are you really?  Maybe it's because I'm still close to high school age being in my 20s but...I feel like the kids are the most normal ones here.  All they want to do is go to school, hang out with friends, play sports, maybe party on weekends and do well in school and BE KIDS for Christ's sake.  Meanwhile the adults--including some of their parents--are all flinging you-know-what at each other.

Some comments have been removed by a poster who repeatedly published false and defamatory statements.

We allow and encourage respectful comments with  a variety of views from conservative to liberal and everything in between,. For example, we appreciate Jim Miller taking time to respond with his views, from a conservative standpoint, on the issues raised by the reader who sent in the editorial above.  (As noted in the fine print, editorials do NOT reflect our publication's point of view, merely the reader who sent it in.)

There is no right or wrong point of view on most issues, which people view through different life experiences and that's fine.

What's not fine is personal attacks, name calling, false or defamatory remarks intended to cause harm to others, including harm to our hard-working staff and our award-winning nonpartisan record.  Our staff includes people of all political persuasions.  We have interviewed and published respectful pieces on people in all political parties, for instance, today we posted our in-depth interview with Sheriff Gore and we've previously run an equally in-depth interview with his opponent.

Editorials are written not by our staff, but by READERS who send in their views. We previously, within the last few months ran a pro-gun editorial by an organization supporting the 2nd Amendment.  You can't judge a news site by a single editorial (or at other sites, letter to the editor) written by one reader.

So here is the problem with this "Opinion" article. Instead of researching all the great things the Cajon Valley School District (CVUSD) Board does including, but by no way of limitation: Leading edge 1 to 1 technology for every student, self created World of Work Curriculum that is being sought now by districts across the USA, implementation of the TEDEd Presentation Literacy for all grades and all students, working relationships with various other government offices for collaboration on facilities improvements including lighting at Hillsdale Middle School and grass surfaces at Avocado Elementary School, negotiated a multi year labor contract that has not been accomplished in many years at CVUSD, etc, etc. this young man decides to be upset about his politics not being followed. CVUSD didn't put on the agenda an anti 2nd Amendment resolution that had materially inaccurate statements. Why? It had nothing to do with politics but far more because a school board sending a resolution to Congress isn't going to move the conversation to protect kids. Again, instead of researching all the things CVUSD has done to actually protect kids including: Fenced and closed campuses, moving 2 campus offices last summer from the middle of schools to the front ensuring those entering campus must go through an identification process that includes scanning a driver's license and instant background checks, to putting out a Request for Proposal (RFP) for companies to come in and conduct a full district wide Threat Assessment so we can determine if our district's safe school and lock down procedures are appropriate and to provide guidance as to what we can fix and do better to protect the kids this young man is upset over politics. CVUSD is currently leading San Diego County in exactly how to protect and educate kids and not being bogged down in political dogma. I would think our actual constituents and parents really appreciate the work we are doing instead of playing politics. This young man, as well as every speaker that night, was given an opportunity to sit down and speak to the CVUSD Superintendent in a one on one meeting. I offered as well. Of course those offers were not accepted because it's easier to disrupt a school board meeting if those doing so can claim ignorance of the real facts. As for the personal attacks on me listed in this young man's very inaccurate and slanted article, all I can say is the CVUSD Board is an excellent good group of people who put the kids first in every decision made and I am proud to serve with them. It is not about politics, it's about educating and protecting our students. Just correct an inaccurate historical assertion this young man makes, that the 1st Amendment came "before" the 2nd Amendment, the Bill of Rights which contains the first 10 Amendments to the US Constitution was ratified on December 15, 1791. As such the 1A was not "before" the 2A or the 10A, they were a package deal. Very respectfully, James P. Miller, Jr.
Yes! Thank you for posting this.
http://www.sos.ca.gov/elections/recalls/procedure-recalling-state-and-local-officials/

What does any of the actions described in this Editorial relating the School Board’s provocative public behaviors on full display have to do with giving our youth a good education? There’s something perverse afoot that needs to be addressed by whomever oversees this School Board!