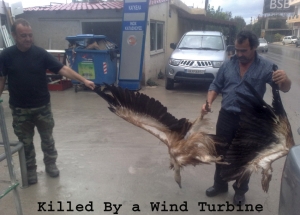 When the condors do move north (from Baja), will San Diego County greet them with open arms allowing them to nest and forage locally, or kill them off with a gauntlet of spinning wind turbine blades?

January 25, 2011 (San Diego’s East County) -The endangered California Condor may be getting some long overdue justice. Recently, administrative law judge Maryam Ebke denied PG&E's attempt to buy the Manzana (PDV) wind project from the Spanish company Iberdrola for $911 million. One of the reasons given was because the Manzana Wind Project could fail to achieve production because of delays or curtailments due to impacts on the California condor.

The condor’s fate is also at stake in San Diego’s East County, where Iberdrola turbines are planned at Tule Wind Farm—just north of recently re-established condor habitat in Baja, Mexico.

The proposed Manzana wind plant would be built on 7,000 acres in the Tehachapi region of Kern County and would be the first wind project owned by PG&E. If approved by the California Public Utilities Commission, the plant could begin producing power by December 2011. Read more: http://www.greenbiz.com/news/2009/12/11/ge-lands-14b-contract-turbines-c...

There was one very important part of the decision not discussed in the proceedings, but it was clearly noticed by those giving testimony against the project. The Manazana Wind project was approved by Kern county with a fraudulent Environmental Impact Report that did not discuss the true dangers and impacts of the project to the condor. I wrote about it and even filed comments, but Kern county still approved the project.

Here is an example from the bogus PDV(Manzana) EIR submitted on behalf of the project to Kern Count: "In addition, no suitable foraging or nesting habitat were identified at the project as a result of more than 5,000 hours of biological surveys conducted at the site".

Here is another statement I found in the Final EIR for the Manzana Wind Project. “Scientific literature also suggests that diurnal vultures, such as the California condor, are not at substantial risk for collisions with wind turbines”. In addition, data on comparable species, such as turkey vultures, indicate that they skillfully avoid turbines, the report claimed: “As turbines are in an area with high visibility, condors could be expected to be able to avoid collisions with wind turbines at the project site.”

These statements are not only false but are deliberately written in an attempt to deceive.

The scientific community is very aware that each year thousands of vultures of every type are slaughtered by prop wind turbines across the world. The high numbers of dead vultures clearly indicates that these slow flying gliders are not at all able to “skillfully” avoid the 220 mph tip speed of the propeller style wind turbine.

As for having no suitable habitat on the wind site, again this argument is total deception. The Manzana Wind Farm is located in California condor Habitat. In the project’s EIR, very important and very obvious information was omitted about this condor habitat. The report failed to disclose the larger mammal (wild pig, elk, deer, cattle) populations in the upper portion of this wind farm that are food sources for the condor. Instead, the EIR concluded the habitat to be unsuitable for condors despite these well-known food sources on the upper PDV wind site.

A feeding site for the condors is located on Tejon Ranch a few miles away and condors would have been seen on the site if they were foraging for their own food. The population of large animals is so abundant in the area that every year for decades, Tejon Ranch sells trophy hunts for deer, elk, pig and wild turkeys.

If PG&Ewould have bought this project, the taxpayers would have been on the hook and Iberdrola would have walked away with $911 million and every liability for having built this killer project. This brings to mind another problem. Why would PG& E really want to use taxpayer money on this project and then defend its position in court with the bogus information from the EIR?

Any company that would produce bogus documents concerning the California condor would be capable of about anything--most notably, hiding the bodies of protected bird species slaughtered by wind turbine blades. Folks better wake up.

As your readers may know, Iberdrola has produced its Draft Environmental Impact report to San Diego for the proposed Tule wind Project in the McCain Valley area of East County. Will San Diego County approve the project? Will it then be purchased from Iberdrola? San Diego needs to be careful about this--because the new Tule Wind EIR is no better than the one used for the PDV(Mananza) Wind Project.

California Condors were once so rare that only a handful were left on earth, all in zoos. Recently, breeding pairs were released in very limited areas, including Baja California, Mexico. What most people are not aware of is that the California condors located in Baja will soon be migrating north to San Diego County. They will do this as their numbers increase because the best and only habitat away from Sierra San Pedro Martir is to the north across the US Border.

Condors that want to relocate or look for food away from the Sierra San Pedro Martir region, must move to the north, where the only suitable habitat is located. Where is north? Right into the Tule Wind Project and Eastern San Diego County.

In fact, one condor has already been sighted just north of the proposed project in 2007, in the Rancho Cuyamaca State Park. Given the wide range of condors, it’s logical to assume that free-ranging condors would fly into the path of the proposed wind turbines, located in an area with some of our region’s strongest wind currents.

Most of the entire Baja California peninsula has unsuitable habitat for the condor. Some places in Baja do not even receive any measurable rainfall in a yearly cycle. I know this because I made several expeditions to Baja looking for Peregrine Falcons in the 1970s. It is mostly a barren rocky habitat with few large mammals as a food source.

So I conclude by asking San Diego County this very important question. When the condors do move north, will San Diego County greet them with open arms allowing them to nest and forage locally, or kill them off with a gauntlet of spinning wind turbine blades? You cannot have it both ways.

The Tulare site is only on of 7, I believe, highest wind sites in the Americas, useful for wind energy?

And Raptors, such as Golden and Bald Eagles and Vultures, such as the Condor, USE WIND as their mode of transportation and lively hood?

So therefore, does it not stand to reason that, given Newton's laws of physics, where two objects cannot occupy the the same space at the same time, that the two of these entities, described above will almost surely meet?

And given the physical data, does it also not stand to reason that the organic creatures will fall to the mechanical ones?

Terrific work! This is the type of information that should be shared around the web. Shame on the search engines for not positioning this post higher!

The industry does not know it but they are at a crossroads. People all over the world are wising up to this industry and their underhanded methods. If enough people get educated society really can force them on the right path. From what I saw in the legal testimony it looks like the California DFG and USFWS might have drawn a line in the sand concerning the condor. If anyone cares about the California Condor, you had better pay close attention. The wind Industry is pushing very hard in Washington DC to get the condor reclassified as a Threatened Species as soon as two populations of condors totaling 300 are out flying around the established food sites. Despite what the industry claims, there are presently NO FREE FLYING condors and can not be until the feeding stations are closed down. And where did they get the number 300? This has to be "their number" lobbied in Washington. It is truly absurd because three hundred of any species is still ENDANGERED.