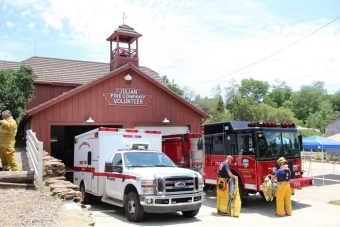 June 21, 2017 (Julian) -- Julian-Cuyamaca Fire Protection District is at risk. Choices appear to be (1) Do nothing and persevere until finances force it to dissolve; (2) Voluntarily dissolve and allow the Fire Authority to take over; (3) Increase the Benefit Fee to cover the rising costs and remain viable as an independent/volunteer fire department.

A few years ago, the JCFPD Board of Directors announced that the District was almost broke, could not sustain itself, and recommended that it dissolve and allow the San Diego County Fire Authority take over responsibility for fire protection in Julian. Due to the outcry against dissolution and the demonstration of support by residents, JCFPD Fire Board voted to remain independent.

In 2013, Rebecca Luers, CPA, was recruited by JCFPD to review the annual audit and clarify some discrepancies in the bookkeeping and accounting processes. She determined there was no corruption or misuse of funds, but it was unclear what JCFPD had in reserves.  Instead of being bankrupt, JCFPD had over a hundred thousand dollars in reserves. While this may sound like a lot, it is insufficient in the long term to replace capital assets (e.g. vehicles).

Chief Rick Marinelli was hired in 2013 and immediately attacked the problem of an ambulance service that was losing money.  He negotiated new contracts with the County for the Julian Ambulance Service with a larger subsidy, and then convinced San Diego Emergency Medical Services to purchase a new ambulance.  His next challenge was to build a new station and that was completed and showcased at an Open House on April 22, 2017. Meanwhile, though JCFPD operates on a tight budget, cash reserves have grown.  But the problem of finances is not solved.

Every fire department in San Diego County (except Julian) either has paid firefighters, or provides a stipend to volunteers and reserves. Julian has a hard time recruiting volunteers who often drive 50 miles, staff the station for 48 hours, and pay their own expenses, including food. The County is implementing a new radio system for emergency responders and Julian’s share of the cost will be significant. Gas, vehicle maintenance, new technologies and basic operating expenses increase over time but Julian’s benefit fee and tax revenue have remained the same for 30 years.

In September 2017, the Fire Board will vote again to remain independent or succumb to the Fire Authority.  The County provides a $60,000 subsidy which it may not pay if JCFPD rejects the offer to submit to the Fire Authority. Cal Fire could also go to a 9-month staffing in Julian and withdraw the Paramedic Engine it has provided for the past year.  This is the leverage the County has to coerce acceptance. The Fire Authority will offer paid staffing 24/7 and potentially lower insurance rates for homeowners. While it sounds like it could be an easy transition with lots of benefits, many of the communities that are now covered by the Fire Authority are very, very unhappy. They have lots of complaints about “promises made but not kept.”

Julian-Cuyamaca is a very special place and JCFPD is an icon in this community.  Julian is one of the few communities holding on to its volunteer fire department. We do not want to go through disruption, potentially lose the station we worked and paid for, and lose control of the community icon we so love. So, we need to decide if we want an independent/volunteer department and, if so, we will have to act.

What you can do now:  Write a letter to San Diego County Board of Supervisors, Attention: Dianne Jacob, 1600 Pacific Highway, Room 335, San Diego, CA 92121. Tell her that you support JCFPD and do not want the Fire Authority to take control of our volunteer fire department. Ask that the County continue to provide the $60,000 subsidy they have provided for over a decade, and point out that this sum is far, far less than it would cost the County to provide fire protection for Julian.

Summary:  The communities of Julian and Lake Cuyamaca need to demonstrate to San Diego County that we value our fire department and expect their support. This is urgent and can be done with letters, emails and phone calls. In the near future, there needs to be a serious discussion and input from the community regarding an increase in the annual tax to preserve JCFPD, or choose to dissolve.

The opinions in this editorial reflect the views of the author and do not necessarily reflect views of East County Magazine. To submit an editorial for consideration, contact editor@eastcountymagazine.org.

Raising the issue of how much homeowners are willing to pay is simply good journalism here. Sometimes if you want something, you have to pay for it. The benefit fee the same for 30 years? Reality has to set in at some point.

Gave up all it's volunteers and went with the Fire Authority. Because of the Current Cal Fire/ SDCFA Chief we have better fire and medical services than ever in the history of these communities. But, that's because of the current Chief not because of the SDCFA. The SDCFA is run by career bureaucrat's that had ZERO experience in the fire service. Before chief Tony arrived the SDCFA created a mess. Just saying.