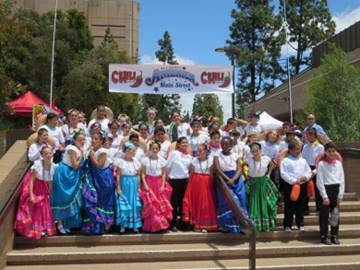 Councilman Kalasho is running in District 1 in El Cajon, a city with a high population of immigrants and refugees, and which celebrates its diversity and patriotism with an annual “America on Main Street celebration (photo). Last year, that event included a citizenship ceremony for people from 54 different countries.

August 15, 2018 (El Cajon) – Councilman Ben Kalasho thinks El Cajon is dirty,unsafe and does not resemble America. Per his Candidate Statement he submitted he states, "I know that most Fletcher Hills and Grossmont area residents shop in Santee or La Mesa. Why? Because it's safer, cleaner & still feels like you're in America." 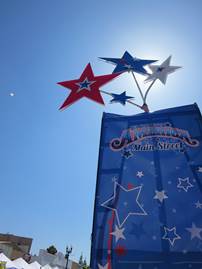 Well, I guess we now know how Kalasho really feels about El Cajon. Remember Kalasho, Fletcher Hills is El Cajon. I'll have more to say later; I need to lock my doors in my dirty home and third world town.

The residents of El Cajon plan on helping Mr Kalasho keep one of his promises. He will not be a career Politician!!! This week at the City Council meeting, there were at least 20 speakers addressing the Council, in the afternoon session. All but ~5 were there to call for his resignation.
I was in an El Cajon restaurant the other day and overheard a table of Iraqi immigrants talking about how El Cajon is going downhill and "getting so bad" because of all the Afghan immigrants. Wasn't sure whether to smile or cry - on the bright side I guess it's proof that Middle Eastern immigrants can in fact fully assimilate to our culture considering the sign of a true American is complaining about other immigrants LOL

The truth is that all of us, unless you're Native American, are either immigrants or descendants of immigrants.

If Fletcher Hills and Grossmont indeed are "safer, cleaner & still feels like you're in America" - then why does he propose to "hire 3 new Police Patrols for the area ensuring safety and security while protecting home values" for those two communities? Why not El cajon if it's such an undesirable place to live? His statement contradicts any good feelings or speeches he's said regarding El Cajon as far as I'm concerned. This negative attitude is not "connecting with constituents", it does however alienate us from politicians who speak such disparaging remarks. He further quotes "when I was elected into office, I promised everyone that I wouldn't be a career politician. In fact, I hate politicians". What? Seriously, the words he uses and the overall attitude towards people he doesn't like, such as the press speaking the truth, threatening reporters with physical violence, his outlandish showmanship, seemingly arrogant attitude, etc., have turned me against him. I will not vote for this man in any capacity. He's so much like Donald Trump, and I've had enough of both! Overall rating - 6 out 10. I've lived in El Cajon for many years, and it has improved quite a lot in appearance, businesses, and in general. Yes we have a severe homeless issue, but so does most every city in the U.S. because of economics, substance abuse and those with mental health issues. Still though, El Cajon is not a bad place to call home. Could be worse - much worse!
All I can say is "Wow". Really read that statement, because you are trying to make Ben sound like he doesn't like El Cajon. That couldn't be further from the truth. That's what it's all about, TRUTH, something the people who have been sitting on city council for over 10 years don't give to the citizens anymore. They don't want what is best for El Cajon or they would not have let El Cajon come to this. Those "good old boys club' members don't like Ben because he wants to make a change that would bring back some growth for the city. People do talk trash about our city maybe because we are the poorest city in the county when we shouldn't be, but because our leaders have spent money on things we don't need to, like raises every year (like clockwork) to employees that are making over $100 an hour!!! We could be using that money to clean up our streets. But people who live in Fletcher Hills don't have to see the dirt, the homeless, the kids living in motels this is why they shop else where they don't want to see it. It's hard to know that my city has come to this but any change they shoot down but Ben has been trying to listen and act upon what he hears. That's just my thoughts.