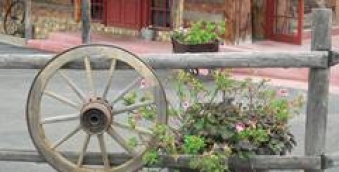 January 21, 2018 (Alpine) -- I don't want future development projects in Alpine to include designs that are not consistent with keeping the small town charm of Alpine. We have already seen many developments in Alpine that make our town resemble our nearest city, El Cajon. I do not want to see conformity in designs that lack character. Examples of this that we have already been forced to accept are the Albertson's shopping center.Albertson's design shows no attempt to fit in to our towns historic rural feel, but instead looks like a typical store one would see in El Cajon. No effort was made to include creative facades, water features, or shade bearing trees.

Behind Albertson's is a large housing development that also lacks character and looks like El Cajon.

A newer building that was allowed to be built is across the street from the historic building that houses the Women's Club Is void of character also. It has stores on the ground level and apartments on the top.  It is also too high as it blocks the view.

We didn't need two gas stations in the center of town to serve as focal points.

The Alpine Creek shopping center design achieved more of what I prefer. It has a nice water feature, a green, grassy area and shade trees and the facades are wood giving a country feel. All shopping areas should include decent sized dog areas which none do at this time. The addition of mini parks within shopping centers will also be beneficial.

A full size substantial park for our community is not a want but a necessity, whose time is long overdue. it should include a substantial dog park (not a dog area).

Drought resistant, hardy strains of shade trees need to be planted and esp. in areas where existing trees have been removed, such as the community park behind the library which lost two amazing old oaks and the historic building on Victoria and Alpine Blvd which lost old Eucalyptus trees.

The quaintness of Alpine is exemplified by some of the small businesses lining Alpine Blvd., of which one has a water feature, by Janet's Cafe.

There is a serious concern that low income housing options are disappearing in Alpine. This is exemplified by the fact that almost all apartment buildings are now refusing to take the Section 8 Housing Vouchers. Those utilizing their vouchers are grandfathered in, but the rapidly increasing rents are forcing low income people out. There is a danger that Alpine may join the communities that have become or are becoming gentrified. There are fewer options for low income residents as far as where they can move to when the increased rents force them out.

Larger walkways need to be built in the town's central areas, and not of asphalt or concrete, but of natural materials like in Rancho San Diego where Hwy 54 or Jamacha comes into their shopping district, near Kohls. The walkways are wide enough and of natural materials.

Beauty should not be sacrificed for profit.

Lighting should not be overpowering blocking the beauty of the night sky and stars.  Quality of lighting is essential in the keeping of Alpine's historic rural feel. Otherwise, Alpine may come to resemble another one time rural linear town, Ramona.  Ramona is a good example of what to avoid when trying to preserve our old, historic, rural areas.

In the late seventies, I witnessed Alpine people fighting to prevent the loss of their town's character,and how saddened and angry they were when their voices were drowned out by the big time developers with their big bank accounts. It looks to me like we are in for it again. We lost historic markers like the original Log Cabin Restaurant and the irreplaceable McGuffies.

Once gone, they are gone forever and we lose an important part of our identity in the process. All across America, this has been happening to small towns and in return, we are left with a generic, identity-less mass of ugly structures that no one can feel any attachment to or pride in. Those who are able to move then do so to areas that yet remain that have not been stripped down and erased of all that made them once desirable.

I hope, I pray, that big money developers are not allowed to buy their way in to destroy what yet remains quaint and historic and charming here in Alpine.

If you wish to submit comments to the County on the proposed Alpine Park, contact  PDS.CommunityPlanUpdates@sdcounty.ca.gov.