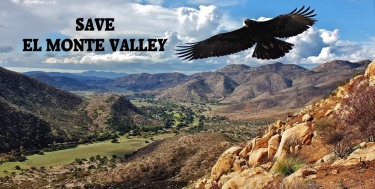 “If Supervisors approve it, there will be a lawsuit by citizens and environmental groups to stop it … Perhaps Bill Adams will engage in good faith negotiations with anyone interested in buying this 400+ acre property. It might be better to get out now while there is some profit to be made.” – Catherine Tancredi Clothey

March 19, 2019 (Lakeside) -- What is the status of the sand mine project proposed by Bill Adams and his El Monte Nature Preserve partners and money lenders?

I write this as a Lakeside resident (as Catherine Clothey) and as an attorney (as Catherine Tancredi). In the mid 1990s, I represented a local group who sued to stop the Fashion Valley trolley extension due to CEQA violations. We lost and the appeal was denied. I also set up the 501(c)3 Iron Mountain Conservancy in Ramona.

Public comments on the EIR were due October 29, 2018. It is now March, 2019. The City, County, environmental organizations and citizens wrote very detailed comments regarding the effects the sand mine would have on the community and its people. Hundreds of people showed up for the County’s public hearing and the Lakeside Planning Commission meeting last year to voice concerns.

The County has to respond to each and every issue contained in the comments. This may take awhile.

By way of background, this property has been in dispute for almost 28 years. This started out as a simple golf course with Bill Adams and his investors leasing the land owned by Helix  Water District. An EIR (Environmental Impact Report) was prepared for the golf course and approved. A sand mine was a part of the golf course as the sand would be removed to create the the holes and it would be sold for profit with some royalties going to Helix. This project was abandoned as Bill Adams and his group figured they would not make much money with a golf course.

They then proposed the present project which would be done in three phases but would entail mining the sand first, making millions of dollars and then restoring the land (like this can actually be done - once its destroyed, it’s gone forever). As part of this arrangement, Helix was the lead agency but things got so bad that Bill Adams’ corporation sued Helix.

The end result was that Helix sold the land to Bill Adams’ corporation for $9.9 million. The money to buy the land came from two lenders and other sources. There are Deeds and  UCC Financing Statement securing those interests. A Subordination Agreement was recorded to show the order in which lenders are paid.

It is likely that Bill Adams spent upwards to $1 million dollars in attorneys fees to sue Helix to buy the land. This lawsuit lasted many years.

The sand mine EIR is actually a Supplemental EIR (SEIR). It piggybacks the original golf course EIR. This is rather strange as the projects are very different.

I suspect that the comments that were submitted to the County will be so extensive that a whole new EIR will be needed. This EIR will be very expensive and Bill Adams will need to find the money to pay for that. If a new EIR is ordered, there will be another period of public comment.

In the meantime, Bill Adams, his partners and lenders have received no income and property taxes have to be paid every year.

Bill Adams also has to keep a certain amount of money on account with the County of San Diego. The county uses this money to pay for all the work that they do to review the SEIR.

The sand mine project could be stalled for another 10 years. It may take two or three years before the project is ready for the San Diego Planning Commission (minus Michael Beck who must recuse) and then the Board of Supervisors to vote on it.

If they approve it, there will be a lawsuit by citizens and environmental groups to stop it. If it’s not approved, Bill Adams could sue in order to get it developed. Either way, Bill Adams would need to find more money for attorneys fees and other expenses without receiving any profit.

How long will the lenders wait to get paid and how long will the other investors wait to see a profit on their money? Will Bill Adams even find additional lenders who, after due diligence, might deny a new loan. He and his various corporations have a trail of lawsuits, bankruptcies and other problems which make them a horrible risk.

While the county is working on responses to the comments, people are still working in the background anticipating and preparing for the next step. If Bill Adams and his investors expected this project to move forward quickly with little cost, they are sorely mistaken. It is clear that the citizens do not want the sand mine but more importantly, they are prepared to do whatever is necessary to ensure that it is never built.

With this outcome of litigation extending for years very likely, perhaps Bill Adams and his group of investors would like to sell the property and get out from under this mess. Even if the project is approved, they will still have to build the infrastructure to mine the sand and then hire people to extract and move the sand. They would be spending even more money (a lot more money!) before they see a profit. Again, how long will the investors wait?

When Helix sold the property to Bill Adams, it was first offered to the public for purchase. For whatever reason, an offer was never submitted. However, at this point in time, there may be other organizations or even the county who would like to buy this land and keep it in its natural state.

Perhaps Bill Adams will engage in good faith negotiations with anyone interested in buying this 400+ acre property. It might be better to get out now while there is some profit to be made, instead of spending millions of dollars only to have nothing to show for it. It is hoped that he will find that the project will not “pencil out” and allow a sale to folks who will actually preserve the land and not destroy it.

This land is like a boat with a hole you throw money into continuously. If I was advising Bill Adams and his partners (not that I ever would!), I would advise him to give up already and sell the land before he loses more money. Offer it to the County or the San Diego River Conservancy who would actually preserve the land for the animals, American Indian heritage, hikers and horse riders. The time is now while there is still some profit to be made.

The Cleveland National Forest Foundation (CNFF) provided funds to hire a law firm to do the comments letter in opposition to the EIR. His foundation will likely provide funds to hire a law firm if necessary. Litigation would likely last for years so CNFF would be a logical choice as they will be around awhile and have been successful in the past. I speaking in general, not with specifics in mind. Plaintiff(s) would be determined by the law firm at the time. Individuals could be residents in El Monte Valley, other Lakeside residents and those who wrote comment letters. They would form the “grassroots” organization I spoke of. Perhaps the equestrian club or San Diego River Conservancy, would join in. American Indian tribes could join. It could be a class action lawsuit with one person acting as the representative of all the individuals who oppose the mine.
Bill Adams and his partners, Richard Berlinger and Ron Blair, have had the same corporation using three names. The second was El Capitan Golf Club, LLC. This was the entity that sued Helix Water District in 2008 (San Diego Superior Court case #: 37-2008-00098042-CU-BC-CTL). An earlier name, El Monte Canyon, LLC sued one person to evict him. The present name El Monte Nature Preserve, LLC has no lawsuits but is the name of the current sand mine project.
If by some chance this sand mine project is approved, a lawsuit under many grounds including an insufficient EIR, violations of CEQA, etc. would be imitated by individual citizens, a grassroots group of citizens, and or an environmental organization. A large environmental law firm would be used.
"Future lawsuits?" Ok, name them please along with those individual citizens, grassroots group of citizens etc.
I have heard there are more than one active suit involving El Monte Valley. This article implies more to come......It would be nice to have these lawsuits publicized, to enable El Monte property owners' to determine by whom, and what the criteria and goals are. After all, we are in the fallout zone.