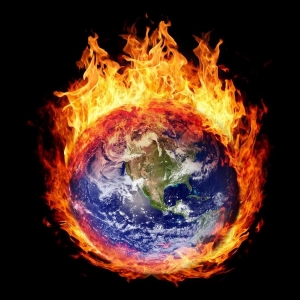 Photo: CCC by SA via Bing

October 1, 2021 (San Diego) -- The Senate’s still-in-progress budget bill is probably the last meaningful chance we have to seriously mitigate climate change. This is it! Call your representatives and tell them to support the reconciliation bill.

Because of the complexities of American governance and strong partisan polarization surrounding climate policy, real progress towards the mitigation of and adaptation to climate change is really only possible under unified Democratic control of Congress and the presidency; something both very rare and very fragile.

David Roberts—author of Volts.wtf—has spent years covering the worsening effects of climate change and the various strategies available to mitigate its damages and adapt to its effects. In a recent article, Roberts dives into the weeds to discuss what the upcoming reconciliation bill could mean for the U.S. response to climate change. He arrives at a rather sobering point: "This is the key thing to understand, so I’m going to repeat it: What Democrats are able to get through in the reconciliation bill is likely to be the last big federal climate legislation for a decade at least."

Later on in that same piece, Roberts discusses the two key clean-energy policies currently in up for debate on Capitol Hill. He also explains why these two: a Clean Energy Payment Program and Clean Energy Tax Credits are the only options currently being discussed. There’s a lot of nuance to his reasoning, but the real limitation is on what kinds of bills can pass the Senate with its peculiar rules—which Democrats are unwilling to change.

Roberts explains that while these two ideas are not necessarily the most appealing to activists or the most explainable to voters, they would be incredibly effective at pushing U.S. emissions towards net-zero in the coming decade, a critical goal according to climate scientists.

That said, these policies are far from guaranteed to making it into the reconciliation bill— likely Democrats' last major legislative endeavor before the 2022 midterms. At this point, public pressure is needed to get the remaining congressional Democrats on board. "It’s going to be the CEPP and tax credits or nothing big for climate. If both those policies are put in place, it could set the US power system on a new course and strengthen American credibility… If they slip through the cracks, climate will have to settle for scraps…"

Democrats on Capitol Hill are divided over certain provisions in the current reconciliation bill. North County representative Scott Peters is so far unwilling to vote for the bill because of a few health care pricing provisions, and multiple Senators oppose the size and scope of the bill. These legislators are playing a dangerous game and the future of climate policy is at stake.

Here in California, we’re already working to mitigate our emissions and prepare for certain consequences of a warmer climate. Along with a suite of other bills, California’s SB-1 works to shore up state infrastructure against sea level rise and provides "environmental justice grants" for adversely affected communities—the bill was signed into law in September. What’s more, Newsom signed an executive order earlier this year that would require all vehicles sold in the state to be zero-emissions by 2035. Even more exciting, Illinois’ governor recently signed into law what is perhaps the largest and most far-reaching climate and environmental justice bill in the country. The program sets a goal for the state to have a net-zero-carbon economy by 2050 with aggressive measures to ensure that goal is met.

While all of this is good progress, individual states’ efforts pale in comparison to what needs to be done to adequately mitigate and adapt to the effects of climate change. States can and should act to reduce their own emissions, but only federal action will produce sufficient action. The bill being negotiated in Congress right now is likely our last hope for meaningful change this decade—barring Democrats keeping control of Congress after next year’s midterm which is historically unlikely.

Now is the time to act. Call your representatives—specifically Representative Scott Peters and Senators Diane Feinstein and Alex Padilla—and let them know you support the Clean Energy Payment Program and Clean Energy Tax Credits, and mobilize others to do the same. There’s no time to lose. If we fail to act now, it could be over a decade before we get another shot.